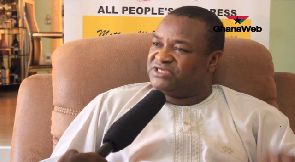 Apparently unperturbed disqualified presidential candidate of the All People’s Congress (APC), Hassan Ayariga, has threatened to annul the results of the December general election or call off the elections if the Electoral Commission (EC) dares commit any errors in the electoral process and the declaration of results.

According to the founder of the APC, unless the EC boss, Charlotte Osei, reverses his (Ayariga’s) disqualification by calling the party to amend its errors, he will not hesitate to annul the results since the EC also makes mistake.

“In an unlikely event where a presiding officer mistakenly signs a result by committing error, I will annul all the results. If you cannot accept the mistakes of others and correct them, when you make that mistake then we also make sure that the whole elections are canceled,” he stated.

He therefore, called on the electorate to disregard claims by the EC that he would not be on the ballot paper in the coming elections, since he is going to fight with all his might to be part of the December 7 poll.

The leader of APC further stated that this year’s elections might not come on if the EC refused to change its stance on the political party.

“What I want the EC to understand is that ‘No Ayariga, no vote.’ We will ensure that the elections will not come on this December. She has to do something about our issue else no vote,” the APC founder cautioned.

Mr. Ayariga, who made the statement during the campaign launch of the party’s parliamentary candidate for Ashaiman, Yakubu Musah, at Mandela Park on Saturday, said he was upset by the decision of the EC to disqualify him.

“I want to encourage all of you here that I have not stopped campaigning and we will never stop campaigning, No! We will continue to campaign and we will demonstrate to the world that we are ready for 2016,” he assured.

According to him, the reasons assigned by the EC for his disqualification cannot shut the dream of the APC to contest in the elections.

“Two subscribers cannot deny us the right to contest in these elections, No! It will not be possible; this is not democracy, and democracy is not about streamlining the people. In 2012 I contested for these elections and I filled the forms properly so how come I fill this time I will fill it wrongly, how come?” Mr. Ayariga queried.

“We have more than 250 offices across Ghana; we have 10 regional offices and even in Ashaiman we have more than four offices. If you say we cannot contest who then can contest? Look at Ayariga’s T-shirts, flags, posters; look at our several branded cars. Do you want us to go and eat them or what?”

He was of the view that Ghana has grown beyond a two-party state since over 25 million people have divergent views. He therefore charged the EC to recall the APC to be on the ballot paper.