I’ll Pray For You – ‘Coup’Doctor To Soldiers 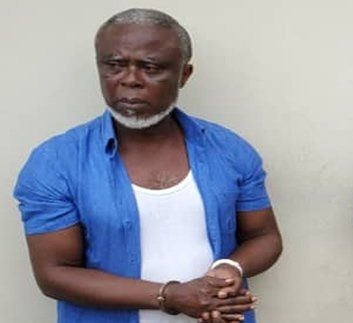 Another audio recording played in the case of ten persons standing trial for planning to overthrow the government, captured the voice of a person believed to be the mastermind of the coup plot, Dr. Frederick MacPalm, telling one of the soldiers that he will not be present on the grounds where the action will take place but will be praying for them.

The recording was done at Dodowa in the residence of one of the accused persons during a meeting held on February 28, 2019, with Staff Sergeant Awarf Kojo Sule, the prosecution’s third witness as well as Donya Kafui aka Ezor and Bright Alan Debrah aka BB who are both on trial.

The discussions bothered on the kind of weapons needed for the ‘operation’ and how many weapons would be needed as well as a discussion bothering on whether or not Ezor who is a blacksmith had the capability to manufacture the needed weapons.

The discussion also touched on the right moment to seize the President and his team, with those present heard saying that once the President moves, he does so with his team which included the Vice President, the Chief of Staff and the Chief of the Defence Staff and how the coup had to be carried in a way that will not record so many casualties.

It was during the discussion that the doctor made it clear to those present that he will not be there in person but offered to pray for those who will be undertaking the mission.

“Me I will not be there, I’ll be home. Me I’ll just be praying for you,” the doctor was heard saying on the tape during the meeting.

The meeting discussed extensively the number of weapons needed and their efficacy, with Dr. MacPalm taking keen interest in the production of the improvised explosive devices (IEDs) which he most of the time referred to as “bomber” and the “bad ones”.

The doctor who was referred to as ‘Doc’ in the conversations was also heard telling the others that the atmosphere was right for their plan and the time to carry it was “now”.

The doctor also suggested placing a sleeping agent in the IEDs so that once they exploded all those that come in contact with them would all fall asleep.

The meeting also discussed the materials needed for the manufacturing of the weapons and how much would be needed for the job, and Ezor suggested that he will need GH¢5,000.

Meanwhile, ACP Dr. Agordzo has made an application before the trial court to grant him ten days to travel to Nairobi in Kenya for a conference.

Moving the motion, Kormivi Dzotsi who held brief of Martin Kpebu, told court that the accused person was attending a programme as a resource person at a Security Sector Reform Training in Nairobi and his absence will not affect the trial because he was willing to wave has to be present at the trial.

The application was opposed by Winifred Sarpong, a Principal State Attorney who argued that the offence for which the accused is standing trial is not one which he can waive his right to be present during the trial.

She referred to Section 70 of Act 30 indicating that the accused had been charged with high treason which is the highest offence in Ghana and not a misdemeanour or an offence that can be dealt with in his absence.

She added that a lot of international organisations are hosting programmes online as a result of Covid-19 and if ACP Dr. Agordzo wishes to participate in the training, then he can do so online via Zoom.

The court is expected to decide on the police officer’s application.