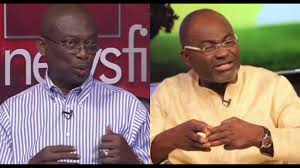 On Friday, June 26, 2020, Accra High court ruled in favour of Editor-in-Chief of the New Crusading Guide newspaper, Abdul Malik Kweku Baako Jnr in a defamatory case brought before it against Ghanaian businessman and Member of Parliament (MP) for the Assin Central Constituency, Kennedy Agyapong.

Per the ruling, the loudmouth politician will pay GH¢100,000 in damages to the veteran journalist. The court also directed Kennedy Agyapong to pay GH¢30,000 as a legal fee.

Reacting to the court ruling on Peace FM's Kokrokoo show on Wednesday, July 1, 2020, Mr Kweku Baako said his intentions of going to the courtroom was not after Kennedy Agyapong's money.

According to him, all needed was to defend his integrity in a court of competent jurisdiction and therefore will donate the money he will receive from Mr. Agyapong to the charity.

"There's another angle I'm look at but I won't disclose it now. We'll take the cash there. I may top it with my own money. I'm broke myself but I don't need that kind of money. That's not why I went to the court. I sort to prevent my integrity for the vicious and malicious words used against me", he told host, Kwame Sefa Kayi.

Mr. Baako also indicated he will constantly monitor Kennedy Agyapong on the very platforms he defamed him to see whether or not he retracts and apologizes as directed by the court to do within 30 days.