I’m not dead; and not sick – Abedi Pele 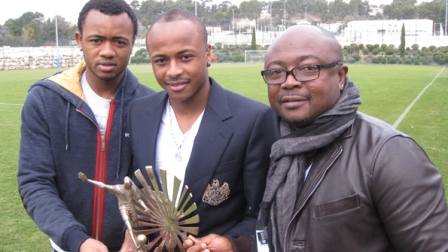 Ghanaian football legend, Abedi Pele, has denied reports on some online new portals that he has died after a short illness faraway in France. The report, on some unknown news websites, started making the rounds on some social media platforms on Friday evening.

But the three-time winner of the African Footballer award, who captained the Black Stars for years, told Rahman Osman of Citi Sports, that he is very much alive and well.

According to him, he has been at his home at East Legon, and that he is not treating any ailment as suggested. He said the report is just a hoax, and so he would not comment further on it.

Abedi Pele was one of the first great African players to make an impact on European club football. Although he has retired from football, his name lives on, as his children, Andre Dede Ayew and Jordan Ayew, feature prominently at Westham and Aston Villa respectively, in the English Premier League. They are also both players of Ghana’s senior national team, the Black Stars.

Abedi Pele played for teams in Switzerland, Germany, Italy and most famously France, where he was very instrumental in Marseille’s prominence in the European Champions League during the early 1990s.

He is arguably Africa’s most decorated and honoured football player ever, winning the France Football Magazine African Player of the Year Award three times, was the inaugural winner of the BBC African Sports Star of the Year in 1992, and the corresponding Confederation of African Football award twice.

He was also awarded the golden ball award for being the best player at the 1992 African Cup of Nations, and was the “man of the match” in Marseille’s historic European Champions League final win over Milan in 1993. Abedi Pele played for Ghana 73 times and is considered the greatest football player in his country’s history, and among the best in Africa.

Until 7 June 2013 when he was surpassed by Asamoah Gyan, he was the top goal scorer for Ghana’s Black Stars with 33 goals. He was a fixture in the African Championships of the 1980s and 90s with his national team, and a member of Ghana’s victorious team in the 1982 African Cup of Nations, but he never had an opportunity to play in the FIFA World Cup, as the Black Stars failed to qualify for the competition during his career.