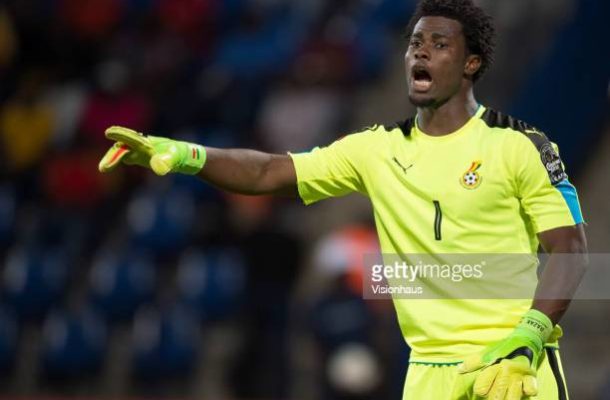 FRANCEVILLE, GABON - FEBRUARY 02: Goalkeeper RAZAK BRIMAH of Ghana during the Semi Final match between Cameroon and Ghana at Stade Franceville on February 02, 2017 in Franceville, Gabon. (Photo by Visionhaus/Corbis via Getty Images)

Former Black Stars goalkeeper Razak Brimah says  that he is surprised he is not getting call ups to the Black Stars as he is performing very well for his club side.

The 34 year old has not played for Ghana since the 2017 African Cup of Nations in Gabon  during the semi finals game against  Cameroon  which Ghana lost 2-0 to eventual champions Cameroon.

According to him, his performances at club level should warrant him a place in the team for the upcoming AFCON qualifiers and the World Cup.

“I am surprised that I haven’t been getting the Black Stars call up because I believe I am doing well and people can testify to it”, he said in an interview.

Brimah recounts losing the AFCON 2017 final in Gabon and hopes to once again play a role in the team to help the country end its over 40-year AFCON title drought.

“I have an unfinished business with the Black Stars because it is my dream to help the team win a trophy.”

Razak Brimah was voted Best Goalkeeper in the 2020/21 Segunda B League, and named in the Segunda B Team of the Year.

He was the number one goalkeeper when Ghana lost the 2015 AFCON finals to Ivory Coast on penalties and was also present  at the 2017 AFCON his last tournament for the Black Stars.