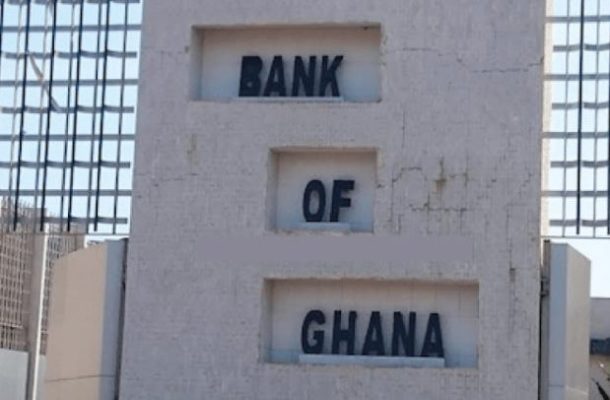 The Institute of Economic Affairs (IEA), has urged the Bank of Ghana (BoG) to impose a ceiling of five percentage points on the spread of banks to lower lending rates in the country.

It also asked the Central Bank to introduce a rule for spread maintained by banks to be equated with the primary reserve ratio of the banks to bring lending rate down.

The Institute said the above could ‘force the hand’ of banks to follow the Policy Rate more closely and keep the lending rate within bounds.

Dr. John K. Kwakye, the Director of Research, IEA, made the call at IEA Forum in Accra on, "High Lending Rates in Ghana: What is the Solution?"

The forum was necessitated by a recent call by President Nana Addo Dankwa Akufo-Addo for BoG to address the problem with high lending rates, given the negative effect on economic growth.

“This rule will be an incentive for banks to keep the spread to a minimum,” he added.

He said Government’s borrowing from banks to finance the budget, macroeconomic instability associated with high budget deficits, and high and multiple taxes imposed on banks were other contributors to the high lending rate.

Dr Kwakye said the Monetary and Regulatory Authority’s inherently upward bias of monetary policy on interest rates, cost of high and currency differentiated reserve requirements, and lack of well-functioning Credit Reference Bureaux was also a major factor and asked the institutions to work towards addressing the issue.

He said banks needed to address operational inefficiencies to reduce costs so that they were not passed on to customers.

The Director said the banks must improve working processes and systems through modernization and digitization and in general, reduce paper overload, economize on time, and avoid unnecessary location dependency practices.

“Reduce operating and overhead expenses, contain labour costs by keeping the right size of staff and reasonable levels of staff pay, keep material, equipment and rent expenses under control; economize on the use of utilities and strengthen customer project appraisal capacity to reduce the incidence of loan defaults and the effect on costs,” he added.

He also called on Government to restrain borrowing from banks by keeping the budget deficit in check to reduce competition for loanable funds and create the necessary stable macroeconomic environment to ease pressure on lending rates.

“Phase out the 5 per cent Ghana Fiscal Stabilisation Levy that has been in place since 2001 and whose introduction was hard to justify and has outlived its usefulness, if any,” he said.

On Monetary and Regulatory Authority, he said they should ensure that the fight against inflation did not itself fuel high lending rates.

“This requires a broader approach to fighting inflation… by paying attention to the supply-side causes, as over-emphasis on demand management tends to weigh on interest rates.”

Dr Kwakye said the Authority should reduce the primary reserve ratio from the current level of eight per cent to five per cent to cut the associated cost to banks.

The Director said the Bank of Ghana should further allow banks to cover their dollar deposits with dollar reserves to avoid exposure to exchange risk and its passage on to lending rates.

“Ensure that the Deposit Insurance Scheme works effectively so as to make a high primary reserve requirement for prudential purposes unnecessary,” he added.