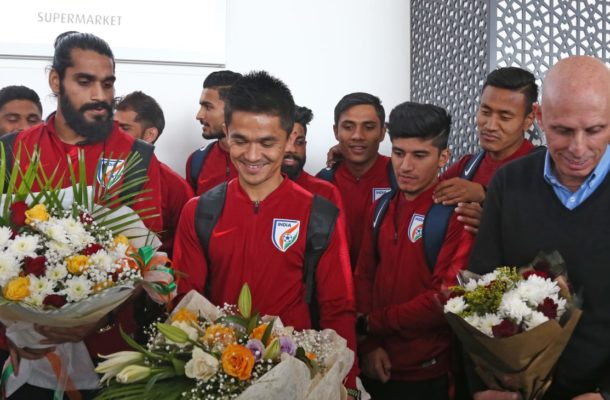 Abu Dhabi: India were the first national team to arrive for the AFC Asian Cup UAE 2019 when they landed today in Abu Dhabi International Airport. The team were greeted with a fervent reception from their supporters thanks to a staggering 3.3 million Indian community who call the UAE home.


The Blue Tigers will be competing in the Continental showpiece for the fourth time in their history, having previously participated in the 1964, 1984 and 2011 editions.

Head coach Stephen Constantine had named a 34-man preliminary squad for the biggest-ever AFC Asian Cup which was trimmed to 28 before boarding the plane to Abu Dhabi. A final list of 23-players will be announced next week.


India have been drawn in Group A alongside hosts UAE, Bahrain as well as Thailand who will be their first opponents on January 6 at the Al Nahyan Stadium in Abu Dhabi. All eyes will be on the Blue Tigers’ contest against the home side on January 10, in what promises to be an electric atmosphere at the Zayed Sports City Stadium.

“The fact that the tournament is in the UAE is a big plus for us given how many Indians have made it their home,” said Sunil Chhetri, India’s most capped player and all-time top scorer.

“We’d love to see as many of them as possible to come and fill the stands whenever we are playing. We’ve been enjoying some good support over the last few months at home and it’s a nice feeling to play in front of your fans. I’m sure the Indians in the UAE will help to recreate that for us,” he added.

Constantine echoed Chhetri’s message, urging supporters to ‘turn out in full force in the UAE and support us as they always do,’ as the Blue Tigers look to continue their fine form from the qualifying stages for the 2019 finals.

“Personally, for me, it is a very proud moment. This is the first time India has qualified in the conventional way, so having topped the group to qualify was something special and the first time this has ever happened. The hard work started in 2015 and will continue. For me, it is a never-ending process and we must continue to improve and get better,” Constantine said.

India will wrap up the group stage in Sharjah when they go head-to-head with Bahrain on January 14.

“We had a very good qualifying campaign and the fans will help us carry that momentum to the competition. It’s important that we give this our best shot,” Chhetri added.