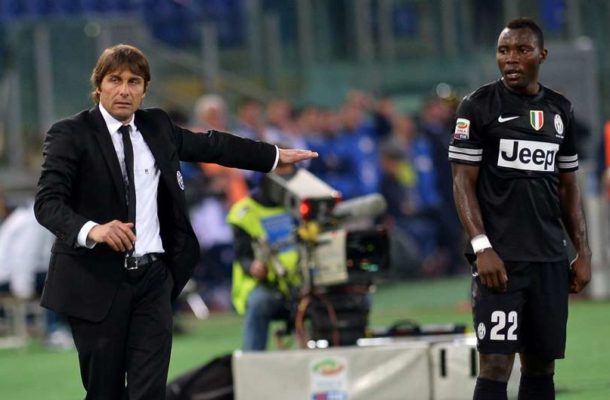 The Ghanaian is returning to the squad after eight month hiatus, having seen no action since October last year.

According to a report from Italian media outlet  Corriere dello Sport, Asamoah, who has been  struggling with a knee problem, has begun a full-scale training with the squad ahead the one off round 16 clash against the Spanish side in a game to be played  at the Veltins-Arena in the German city of Gelsenkirchen.

He has been linked with a move to Turkish side Fenerbahce as his injury challenges has kept him spent more time in the rehab.

But Corriere dello Sport indicates that Coach Atonio Conte will announce the squad in a media broadcast on Monday, for which the 31-year-old Ghanaian national could make his 2020 debut.

The  Uruguayan midfielder Matias Vecino , is unavailable after a knee operation and the mantle has fallen on Asamoah to stage a big come back amid his challenging career with Inter.

Inter will play a single legged match with Getafe behind closed doors in Germany in the last 16 of the Europa League following the Covid-19 pandemic.

Competitions were suspended in March because of the  pandemic that caused Havoc across the globe.

The Europa League will resume from 10 August but the remaining last 16 games,  will be  on 5 and 6 August.

Arrived two years ago on a free transfer from Juventus, Asamoah is also under contract for the next season until June 2021 with a net salary of € 3 million per season.

His last presence dates back to December 6, when he entered Borja Valero's place in the last 20 minutes of the 0-0 draw at San Siro with Roma.

His last race as a starter is the away win in Brescia on 29 October and has since been on the benches and stands, as on the occasion of the last four championship days in which he was not called up by Conte.

Inter and Getafe will meet for the first time and the winner of the tie could potentially be drawn against the likes of Premier League club Manchester United, German outfit Bayer Leverkusen or Ukranian giants Shakhtar Donetsk.

From the quarter final stage onward, the Europa League will be contested in four cities across Germany. Those cities are Cologne, Duisburg, Dusseldorf and Gelsenkirchen.