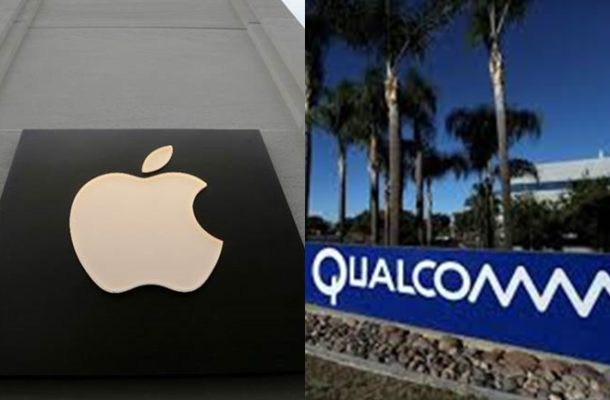 Qualcomm Inc. has fired multiple legal shots at Apple Inc. aiming to use patents to get an import ban on the iPhone. In separate rulings Tuesday, one hit and one missed.
The U.S. International Trade Commission on Tuesday invalidated a Qualcomm patent for a battery-saving feature. Earlier in the day, a separate trade judge said Apple infringed a different Qualcomm patent and recommended certain older models of the iPhone be banned. The commission is scheduled to release a final decision in that case in July.
The cases are among some 80 worldwide between the companies in a dispute that’s lasted more than two years. Qualcomm is hoping a victory, particularly an import ban, could give it greater leverage in technology licensing negotiations. Qualcomm says it’s due billions of dollars in unpaid royalties on the iPhone as the two tech giants argue over the value of the chipmaker’s patents.
The Cupertino, California-based Apple denied infringing any of the patents in the two cases and claimed Qualcomm is trying to shut its only U.S.-based competitor out of the market, something Apple argues will hinder the development of the fifth-generation of mobile communications. In both cases at the trade agency, Apple argued that no import ban should be imposed even if a patent violation is found.
“We’re pleased the ITC has found Qualcomm’s latest patent claims invalid, it’s another important step to making sure American companies are able to compete fairly in the marketplace,” Apple said in a statement following the second ruling. “Qualcomm is using these cases to distract from having to answer for the real issues, their monopolistic business practices.”
Related: Apple Escapes Import Ban in 2nd Qualcomm Case at Trade Agency
Qualcomm, based in San Diego, argued that the opposite is true. If it can’t enforce its patents, that will lessen the value of its innovation and give rivals, particularly China’s Huawei Technologies Co., a chance to gain greater market share. Qualcomm has called the Intel products inferior, and accused Intel and Apple of incorporating unlicensed Qualcomm inventions into the Intel chips to improve their quality.
In the earlier case on Tuesday, ITC Judge MaryJoan McNamara said she would be recommending an import ban on certain models of iPhones, which are made in China, according to a notice posted on the Washington agency’s electronic docket. The judge found no violation of two other Qualcomm patents in the case.
Qualcomm jumped as much as much as 2.6 percent in New York on that earlier ruling. Both stocks reflected the partial wins and losses in extended trading following the commission decision. Apple was up less than one percent while Qualcomm fell less than one percent.
In the case before McNamara, Qualcomm contended that Apple iPhones with Intel Corp. chips infringed two patents related to ways to improve the speed and quality of data downloads and one for a power-saving feature. It’s seeking an order that would ban imports of those iPhones. The judge’s finding of infringement related to the power-saving feature, according to the notice. Her full findings aren’t yet public, and won’t be until both sides get a chance to redact confidential information.
“We appreciate Judge McNamara’s recognition of Apple’s infringement of our hardware patent and that she will be recommending an import ban and cease and desist order,” Qualcomm General Counsel Don Rosenberg said in a statement when the earlier notice came out. The company had no immediate comment on the later-issued decision from the full commission.
The original complaint in the McNamara case linked that patent only to the iPhone 7 and iPhone 7 Plus, but it was unclear which models would be affected by this decision. If the ban only applies to those models, it could have a multibillion-dollar impact on Apple for each year that it still offers those devices. The company will probably discontinue them in the next two years. How 5G Will Juice Up Your Phone and Your Fridge: QuickTake The second decision announced Tuesday targeted a broader range of iPhones, including the iPhone 7, iPhone 8 and iPhone X, and only ones that had Intel chips. Models that had Qualcomm chips wouldn’t be affected. The commission’s full decision, which sidestepped arguments for now over whether the legal battle between the two tech titans has broader implications for the U.S. supremacy in the fifth generation of telecommunications, isn’t yet public.
Apple, chafing under what it considers onerous and expensive licensing requirements, has directed its contractors to stop paying Qualcomm until the two sides can reach a new deal. It’s also turned to Intel to supply the modem chips on its newest models.
Apple likely generated about $58 billion from the iPhone in the U.S. in its 2018 fiscal year. The majority of iPhone sales last year were from newer models like the iPhone X, iPhone 8, and iPhone 8 Plus. Qualcomm’s TechnologyBy all accounts, Qualcomm’s technology underpins all modern communications and it’s a large player in the development of industry standards, spending billions of dollars on research each year. It’s also richly rewarded — the company makes money off the chips in all mobile devices, and also gets paid for the use of its inventions in chips made by others.
The Federal Trade Commission has accused Qualcomm of using its patents on industry standards to shut out competitors from the market and demand high licensing fees, and the two sides await a judge’s ruling in that case. The patents in this case don’t relate to standardized technology but Apple claims Qualcomm is using the ITC to maintain monopoly power.
The cases are In the Matter of Certain Mobile Electronic Devices and Radio Frequency and Processing Components, 337-1093 and 337-1065, both U.S. International Trade Commission (Washington).