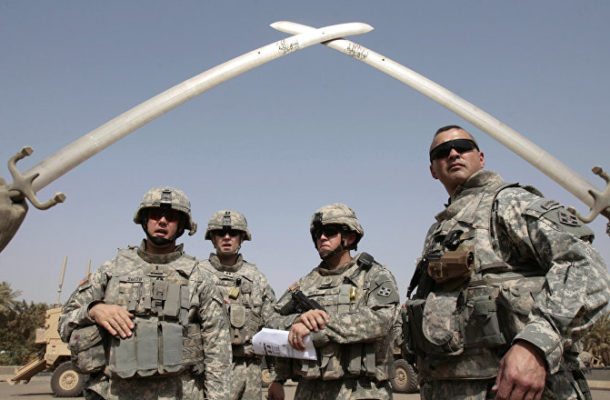 The Iraqi lawmakers mull designing legislation that would terminate the security agreement with the United States, according to the First Deputy Speaker of the Iraqi parliament, Hassan Karim.

"During the next session, the parliament will work on the bill that would include the end of the security agreement with the United States, as well as the end of the presence of the US and other foreign military trainers and advisers in Iraq", Kaabi said in a statement released on the parliament's website.
The statement comes amid US President Donald Trump's recent comment on the situation in the country. In particular, the US president said that Washington wants to keep its forces in Iraq so that the US could keep a close eye on Iran "because Iran is a real problem," according to an excerpt from CBS interview with Trump that will be aired later on Sunday.
"One of the reasons I want to keep it is because I want to be looking a little bit at Iran because Iran is a real problem", Trump said in the CBS interview.
However, the Iraqi deputy speaker went on to slam Trump's "provocative" statement, saying that it grossly violates Iraq’s sovereignty and constitution.

"All parties need, as soon as possible, to stop the US presence and not allow Iraq to be used as a springboard for aggression or surveillance of any state", Kaabi stressed. READ MORE: Iraq, Syria Not As Important for the US As Iran at the Moment — Prof

©
AP Photo / APTV Pompeo Vows to Coordinate US Troops Pullout From Syria With Iraq - Baghdad
On Wednesday, Trump slammed the US intelligence as "extremely passive and naive", claiming that Tehran is destabilizing the Middle East and continuing to test banned missiles. In particular, Trump mentioned an Iran missile test last week and made an oblique reference to Tehran "coming very close to the edge".
The United States reinstated sanctions against Iran following the country's withdrawal from JCPOA in May. The first round of sanctions came into force in August, followed by a second round on 5 November 2018. All other parties to the nuclear deal have disagreed with the US decision.
A December announcement by Trump that all US troops deployed in Syria would be coming home — and reports of plans to cut the US Afghan deployment in half — has prompted effort by Trump's inner circle and Republicans in Congress to delay any withdrawal. READ MORE: Iraq’s PMF Forces Claim to Prevent ‘Suspicious’ US Military Activity – Report

©
AFP 2018 / ATTA KENARE US 'Overall Objective' is to Curb Iranian Influence in Syria, Iraq - Professor
Members of Congress and Trump's White House advisers have attempted to walk back a presidential announcement that some 2,000 US troops in Syria would come home within a month, claiming the Daesh is not yet defeated.
According to CBS interview, Some of the forces moving out of Syria will go to Iraq, where they can monitor any resurgence of Daesh or other militant group and "ultimately some will be coming home", Trump said.
However, the Iraqi Defense Ministry told Sputnik in January that Baghdad did not need and would not need foreign troops on its territory and assured that the US forces currently deployed in the country are there in an advisory capacity.
The US-led international coalition conducts strikes in Syria against Daesh without the authorization from Damascus or the UN Security Council, while Baghdad has given its consent for operations on Iraqi territory. READ MORE:  Trump Visits Iraq, Pledges to Continue US Occupation *Daesh (also known as ISIS/ISIL/IS/Islamic State) is a terrorist group banned in Russia and many other countries.Source: sputniknews.com