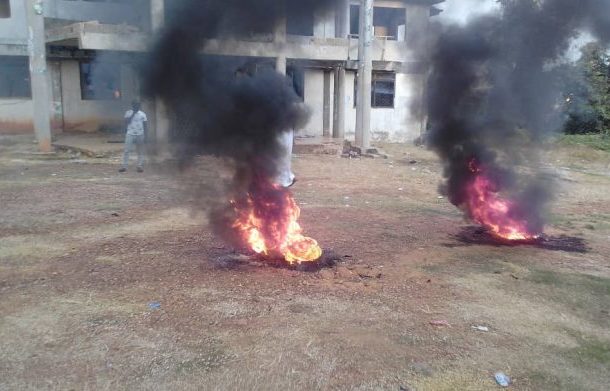 Some irate National Democratic Congress (NDC) youth in Kumasi on Friday, July 19, 2019, protested the inability of their preferred candidate from filing his nomination for the Asawasi constituency.

The irate protesters set fire into car tyres at the NDC  office at Amakom in the Kumasi Metropolis to register their displeasure for disallowing Masawudu Mubarick from filing his nomination for the Asawasi constituency seat.

The aspirant hopeful has failed in his bid to file his nomination forms since Thursday as the party office has always remained locked anytime he goes there with his supporters to do so.

He was at the NDC headquarters in Accra Friday to file but failed, angering his supporters who set fire at the constituency office to register their protest.

Security has been beefed up at the premises to restore law and order.

Some disappointed delegates expressed disappointment over the development.

“I doubt if the party is ready for power. This is not the attributes of a democratic party. These are attempts to frustrate the process but that will not wash,” a visibly unhappy supporter said.

“We are sleeping here until our aspirant files…we are not saying Muntaka has done nothing. All that we are calling for is change,” another said.

He indicated that his outfit has petitioned relevant authorities including national executives to resolve the issue.

“The party has structures and so I have written to the national executives to resolve this impasse,” explained Mr Mubarick adding that: “I believe the party in its wisdom will put matters to rest.”