Is the EC trying to regain composure or engaged in lacing the rigging poison with another layer of honey? 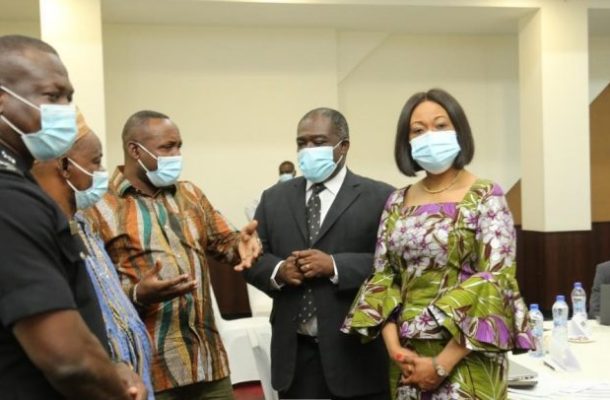 It is worth pointing out to all sceptics and others who do not see the poison laced with honey in the recent announcement by the Jean Adukwei Mensah and Bossman Asare led EC to vary the end of polls from 5pm to 3pm.

After all, it is Akufo-Addo himself who created this unending winding doubt and suspicion, when under trumped up charges he prioritised and spearheaded the removal of Mrs Charlotte Osei from office as the Chairman of the Electoral Commission, protected under the 1992 Constitution of the Republic of Ghana as an independent body, after appointment.

This lingering doubt and suspicion was deepened, when the instructions from Akufo-Addo that came with the appointment of Mrs Jean Adukwei Mensah to as a matter of fact compile a new biometric electoral roll.

This exercise was fraught with a series of human rights abuses including disenfranchisement due to the absurd and weird definition of a national of Ghana and stringent requirements of breeder document, fanning of inflamed ethnic passion through fear, panic and violence with the deployment of the military to certain locations across the country under the pretext of patrolling the borders against movement of infected covid-19 commuters, especially foreign nationals during the exercise, inadequacy of equipment and machinery, personnel, lop-sided schedules and unequal time allotment per region in the registration exercise in favour of thestronghold of the incumbent.

During the registration exercise, several inaccuracies and irregularities suggested padded figures in the strongholds of the NPP and a reduction in figures in traditional strongholds of the NDC. All these anomalies and infringement prepared the grounds for the rigging of the elections on poll day and manage the situation cleverly, after elections.

Those holed up with a notion that whatever is possible with the 3pm timing is possible with 5pm are right on one condition. It has not yet been made apparent what exactly is contained as a 3pm poison. However, it is apparent from previous experience to suspect ANY move of the Jean Adukwei Mensah and Bossman Asare led EC with Joe Anokye doubling as the Director General of NCA and the NPP representative at IPAC.

Now, the surface reasons advanced or given for the variation of close of polls on voting day as spoken by the EC Chairperson sits comfortably and reasonably. Of course, on it's own, varying the time from 5pm to 3pm alone, could not create grounds to suspect motives to rig elections. But beneath it are the versatile constructional, technical and utilitarian exploits possible to take advantage of an instance to rig the elections. That is for those responsible for the NDC to rack their brains for answers.

But wait a minute! Give this a thought. In the last elections, the statement of polls came after 5pm or later (for those polling stations where voting started late or were halted for one good reason or another), when counting of votes were complete. According to intercepted information as evidenced in certain developments after statement of polls, agents of the incumbent engaged in certain exercises that affected the collation of statement of polls.

Just maybe, if the close of polls had been brought back to, sey, 3pm, operatives of the incumbent could achieve more of what it did previously during the last elections. Possibly, this informed the strategy to vary the time for close of polls. The NDC should watch this!