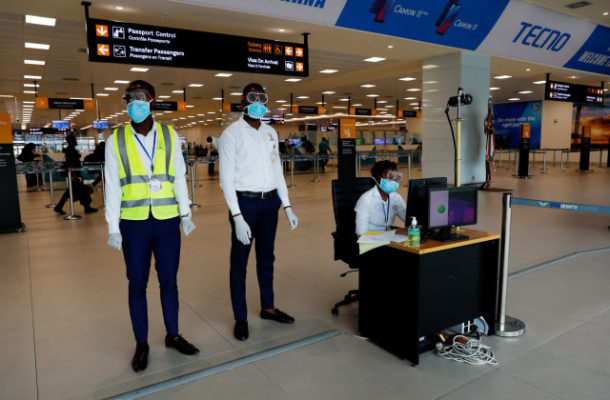 Israel was among the countries that first evacuated its citizen from Ghana hours before the close down of Ghana's border took effect.

Forty Israelis left Ghana in a hastily-organized operation on Sunday afternoon, after Accra announced that it would be closing all its borders that night to curb the spread of the coronavirus.

Their return to Israel came as the Foreign Ministry tried to help citizens who remained in a number of countries closing themselves off.

Ghanaian President Nana Akufo-Addo announced the closure Saturday night, which was to go into effect at midnight Sunday. Previously, foreigners who were residents of Ghana could enter and leave the country, but were subject to self-quarantine upon their return.

Israeli Ambassador to Ghana, Liberia and Sierra Leone Shani Cooper and her small staff worked through the night on Saturday to get Israeli families out of Ghana in light of the closing borders. Many had been planning to leave later in the week.

“We immediately made a list of everyone who was supposed to leave, including pregnant women, children and older people and with our consul in [Ethiopia], began checking the possibility of getting everyone on an Ethiopian Airlines flight today,” Cooper said.

More than 30 Israelis were expected to get on a connecting flight to Israel from Ethiopia.

“Morally, I cannot see myself leaving Israelis behind,” Cooper said after the group boarded its flight. “We are a community… There’s a feeling that I have a personal and moral responsibility for every Israeli in the countries to which I am ambassador.”

Ukraine Ambassador Joel Lion has also worked to facilitate the evacuation of some 600 Israelis.

Kiev stopped all foreign passenger flights, but Lion was able to coordinate four flights from different airports to Israel with the Ukrainian Infrastructure Ministry and Ukraine International Airlines.

Lion arranged one flight together with Joint List MK Ahmad Tibi, who received cries for help from Israeli students in Odessa. With help from the heads of local student unions, they compiled a list of Israeli students, and 160 of them, most of whom are Israeli Arabs, departed from Zaporizhia Airport, about 12 hours from Odessa, on Friday.

Tibi called the situation “unreasonable and unfair” and called on the Prime Minister’s Office to prepare a list of all the countries that are failing to contain the coronavirus and bring back citizens from them.

“Tibi asked the government to do something, and in the end we had to get special permission to land because no foreign planes can land in Ukraine right now,” Lion said from self-quarantine in Kyiv. He also had to arrange special permission to travel between cities, because the country is in a semi-lockdown state.

“We made a package deal that they would take Ukrainians from Tel Aviv and they would send [Israelis] back,” Lion said. “Today, we have a flight to Odessa bringing not only Ukrainians, but also kosher for Passover food for the Chabad [emissaries] in Ukraine.”

Passengers on other flights from Ukraine included pilgrims to Uman, where Rabbi Nahman of Breslov is buried.

The Foreign Ministry called again for Israelis abroad to return to Israel and released a compilation video of ambassadors from around the world, including Lion, imploring Israelis to go home.

The airlines agreed to plan flights to a variety of destinations in which there are large concentrations of Israelis, according to Foreign Ministry recommendations. They will then advertise schedules and prices for the flights.

Israeli embassies will coordinate with local authorities in the various countries to ensure that the flights will have permission to land and take off.

Soon after, El Al added five flights to its schedule: departures from Mumbai, Perth and São Paulo on Tuesday, and Delhi and San Jose,

Israir will operate a flight from Zagreb to Israel on Sunday night to get 50 Israeli students home after a 5.3 magnitude earthquake shook Croatia.

Two flights from Italy, organized by the Foreign Ministry and operated by Israir, will leave from Rome and Milan on Monday evening.

Anyone wanting to board the flights from Italy needs to fill out special forms, which can be found on the social media accounts of Israel’s Embassy in Italy.

In addition, the Foreign Ministry contacted the authorities in Thailand to ask them to exempt Israelis that are passing through Bangkok on connecting flights from needing a visa and medical authorization that they are not carrying the coronavirus.

If Thailand approves the request, it will help many Israelis in East Asia return home. There are flights from Bangkok to Israel via Turkish Airlines, Aeroflot and Ethiopian Airlines.

On Sunday, the ministry updated its chart of ways to leave countries around the world.

Israel has worked to help its citizens who have been trapped behind closed borders.

Tovah Lazaroff contributed to this report.