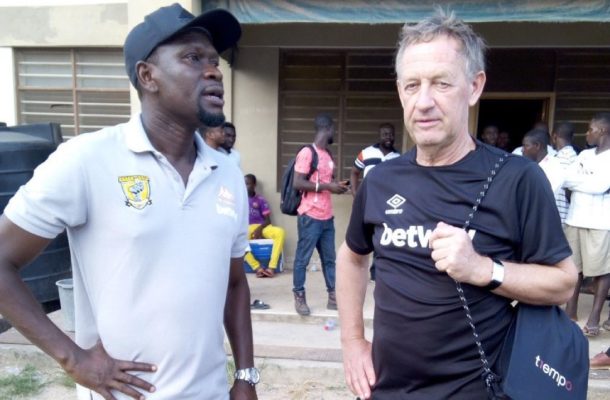 The 44 year old manager officially relieved of his duties as head coach of the club today following a suspension last week for dereliction of duty after failing to supervise the team's training session.

Akonnor reportedly failed to turn up for training on Thursday and Friday when the miners resumed training but was spotted on GTV doing punditry for the FIFA World Cup on Saturday.

“This is silly and pure madness, yes!!! when everyone ask, quote me verbatim that I say the sacking of Akunnor is silly, does not make sense and it is madness,” Mensah told Happy FM

“This is a coach who helped us to survive relegation last season, no one wanted to coach us but this young coach stood up and took the mantle and helped us to survive. We are on course to win the league this season and you sack him. This is madness,”

He added: “No one has communicated anything to us officially, It is even you who is telling us. Yesternite Akunnor called and told me he was going to Accra when it was raining. I did not know it was even because of that because he normally goes home.”

“We the supporters are not in support of this, Akunnor is a gentleman and he is fine with us, we have even planned of rewarding him for his work and helping us to get out of the relegation zone last season”