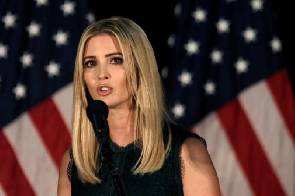 Donald Trump decided this week to roll out an ambitious and expensive plan to help working parents raise their kids, which was remarkable for several reasons.

The first is that Trump seemed to have come up with the entire thing on impulse, as if, having spent many months repulsing American parents with his mockery of women and the disabled, he thought maybe he could wipe the slate clean with a tax credit.

The second is that, once again, the candidate who praised Planned Parenthood from the stage of a Republican debate demonstrated that he has only the most tenuous ideological connection to the party he’s borrowing. Leave aside all the stirring up of racial resentment, and Trump turns out to be about as much of a conservative as Cher.

But to me, the most remarkable thing about Trump’s foray into social policy is the central role played by his 34-year-old daughter Ivanka, whom Trump credited with having inspired and helped design the plan, and who spoke alongside him at the rollout in Pennsylvania.

According to my former colleagues at the New York Times, Ivanka said implementing the policy would be one of her top priorities after her father took office. Which ought to make Mike Pence wonder what part of the portfolio she intends to share with him.

By now it should be clear to all of us that Ivanka and the other Trump kids are looking at the American presidency as another potential family holding, much like the pageant business. And that tremor you’re feeling in the mid-Atlantic isn’t a minor earthquake.

Before we get to the Framers, though, let’s look at more recent history. The adult children of presidential candidates — from George W. Bush to the Romney boys and now Chelsea Clinton — have often played supporting roles as strategists and surrogates. There’s nothing novel about that.

And in a few, well-known instances, family members have taken on governing roles, too. Robert Kennedy served as attorney general and his brother’s chief confidant, which prompted Congress, in 1967, to pass an anti-nepotism law that prevents family members from holding Cabinet posts.

Bill Clinton told voters they would get “two for the price of one” when he ran in 1992, and he honored that promise by handing the job of health care reform to Hillary — a move that infuriated Republicans. (And as I wrote in May, Hillary has vowed, oddly, to put Bill in charge of economic expansion.)

Trump doesn’t have real political advisers, which is why he’s already cycled through three campaign regimes this year. Near as I can tell, he has children and lackeys, and not a whole lot in between.

Last month, two giants of my industry, the New York Times’ Tom Friedman and the Washington Post’s Bob Woodward, got into something of a gentleman’s debate over the Trump kids. Friedman wrote that they should be ashamed of their dad’s exploitive, populist campaign. Woodward accused Friedman of violating the “zone of privacy” normally afforded the families of nominees.

Probably no one’s been a more outspoken defender of politicians’ privacy than I have, but in this case Woodward was applying old rules to a new game, and he was entirely wrong.

Anyone who sat through the grim elegy for America known as this year’s Republican convention should have come away understanding that the Trump kids aren’t family in any traditional sense. They are the platform of Trump’s candidacy.

That convention made clear that Trump has effectively cast aside the entity known as the Republican Party — whose leaders largely stayed away, in any event — and replaced it with his family brand. The primetime speeches that would normally have been delivered by rising stars in the party were instead given by Ivanka and Donald Jr. and Eric and Tiffany.

If Trump’s campaign is the closest thing we’ve seen in presidential politics to a reality show, then it’s not so much “The Apprentice” as it is “The Osbournes” or “Keeping Up With the Kardashians.” You’d be crazy to think that the Trump kids wouldn’t dominate his inner circle in the White House, just as they have in Trump Tower.

I’ve never met Ivanka Trump. I wouldn’t be surprised to find that she’s a person of real substance and a terrific mother to boot. The children of other powerful and wealthy New Yorkers (Chelsea Clinton included) seem to think she’s great, so there’s that.

But here’s what you can learn from reading her very thorough Wikipedia page. She’s a model and designer of jewelry and shoes who worked “briefly” for someone else before joining her father’s business, where somehow she managed to claw her way to one of the company’s top posts in record time.

She’s filled in on her father’s show, “The Apprentice,” and hosted the Miss Teen USA pageant, which her father owns. There’s also the cameo on “Gossip Girl.”

Somehow the section on government and public policy seems to have been overlooked. There’s nothing there about any of that.

So why are we supposed to find it reassuring that Ivanka will make affordable childcare one of her top priorities — or that she has priorities at all? What, exactly, qualifies her to make and enact policy? What does she know about Congress or the vast federal bureaucracy?

It’s one thing to say the Trump children make their father seem more human or more likable. It’s another to believe they should govern the country.

Which brings me back to Jefferson. He, more than any of the Founding Fathers, harbored an abiding fear of monarchism, the idea that by embracing a federal government we might inevitably slide back toward hereditary rule. For more than 200 years, through massive expansions of federal domain, we defied his darkest suspicions.

But here we are, not quite eight years removed from a second Bush presidency, choosing between the wife of a former president, on one hand, and a business-minded entertainer who will entrust the West Wing to his children on the other.

The former should make us wonder about the long-term health of our democracy. The latter should terrify us.

Let Ivanka Trump run for office if she thinks she can govern. She’d be a great candidate and maybe even a very good senator or governor.

Until then, she and her siblings should stick to hotels and pageants.