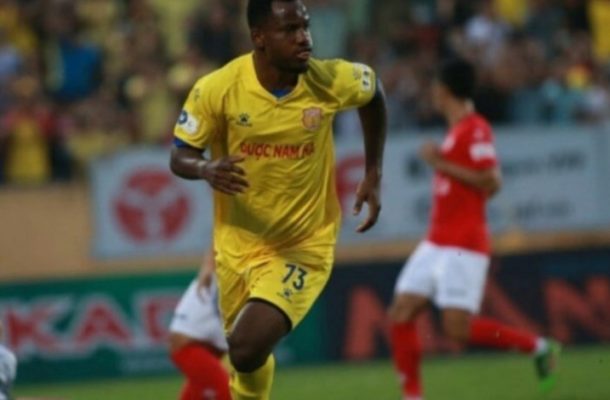 The football fraternity has been thrown into a state of shock as 32 year old Ivorian striker  Oussou Konan has reportedly been poisoned by his cousin whiles on Christmas holidays back home in his hometown of Yopougon.

Whilst initial report suggested that the 32-year old had passed away from illness, further information revealed that Konan was actually murdered by his own cousin, who poisoned him with a glass of tampered wine.

It was then picked up by Vietnamese media, with additional information from Konan’s agent Nguyen Minh Chau. It was Minh Chau who informed the public that Konan’s death was due to foul play, not an illness.

“Former Nam Dinh striker Oussou Konan was murdered at his hometown in the Ivory Coast on December 3rd, 2pm Vietnam time by his own cousin,” said a statement from Minh Chau, as quoted from The Thao 24/7 and Vietbao, “At the end of the first leg of the Saudi Arabian Second Division, Konan decided to return to his hometown to celebrate the New Year with his family when disaster befell him there. Farewell to a very talented striker that I had the opportunity to bond with. May Konan rest in peace. The football fans of Thanh Nam will miss you! Rest in Peace, Konan!”

Minh Chau then went on to elaborate that Konan had drunk a glass of wine that had been spiked with poison by his own cousin, which led to his death. It was unclear what motive that the cousin had in poisoning Konan.

After the 2021 V.League 1 season was abolished due to the increase of COVID-19 cases in Vietnam, Konan left Nam Dinh to play for Al-Bukiryah in the third tier of Saudi Arabian football, with hopes that he could return to Vietnam straight away once the 2022 season starts. He had rejected many offers from other Southeast Asian clubs in favor of a more stable outpost in Saudi Arabia, while waiting for news regarding the 2022 V.League 1 season. However, with his death, Konan’s plans to return to Vietnam would never come into fruition.

During his brief spell in Vietnam, Konan quickly established himself as a fan-favorite amongst the Nam Dinh faithful, with his 7 goals in 12 appearances propelling the Knights of Thanh Nam to 4th on the V.League 1 table before the 2021 season was abolished. Alongside teammate Rodrigo Dias and Hoang Anh Gia Lai’s Nguyen Van Toan, Konan etched his name on the top of the 2021 V.League 1 top scorers’ list, as he and Rodrigo helped Nam Dinh transform from strugglers into top-half challengers.

Nam Dinh’s excellent form in the abolished 2021 season earned them an invitation to the 2022 AFC Cup following the demise of 3rd placed Than Quang Ninh, however, the Knights of Thanh Nam declined the invitation, citing financial issues and fears of COVID as the reason.