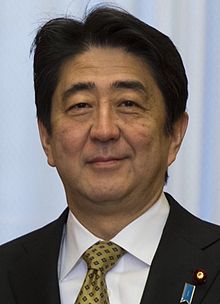 Japanese Prime Minister Shinzo Abe is set to announce on Saturday the launch of an economic forum involving public and private sectors to strengthen business ties to Ghana and a host of other African countries, a Japanese government source has revealed.

According to the Japanese government source, in a speech at a Japan-led African development conference which begins Saturday, the Prime Minister will say that Japan wants Asia and Africa to become a "main artery of growth and prosperity" and for sea routes between the regions to be "controlled by peaceful rules."

Abe also will unveil Japanese measures to help train human resources in Africa and the amount it is prepared to invest in developing infrastructure there over the next three years, the source said.

The Tokyo International Conference on African Development  attended by African leaders, heads of major international donors like the World Bank, and business leaders has been held five times since 1993, but this is the first time for the TICAD summit to take place outside Japan.

In his keynote address, Abe will emphasize Japan's intention to sign investment pacts with many African countries to promote Japanese companies' business operations in the resource-rich continent, over which China is increasing its influence.

The officials of over 70 Japanese companies, including major trading houses, have accompanied Abe to Nairobi to attend the conference.

Among other support measures, Abe will touch on strengthening measures to combat infectious diseases in the wake of the outbreak of Ebola, and cooperation in developing geothermal power generation.

Abe, who arrived in Nairobi Thursday night, has already held talks with the leaders of Ghana, Guinea, Mozambique, South Africa and other African countries to convey Japan's commitment to supporting their economic development, the Japanese Foreign Ministry said.

On Friday, the Japanese government said it will boost its assistance for infrastructure development in Africa by expanding financial support under an initiative focused on energy and transportation.

Under the enhanced initiative, Japan will aim to provide $1.5 billion in yen loans over three years through the Japan International Cooperation Agency in a joint financing program with the African Development Bank.

The African Development Bank plans to provide at least an equal amount, with a focus on developing economic infrastructure as well as social infrastructure including health and education to fight poverty and boost economic growth in the region.

In addition, Japan is ready to provide $300 million for co-financing with the African Development Bank to introduce highly efficient thermal power generation plants.

The joint financing program started in 2005. Japan is providing $2 billion under the current program from 2012 to 2016.

Participating countries of the TICAD summit have also broadly agreed on the draft Nairobi Declaration, which is set to be issued after the summit wraps up on Sunday, a Japanese government source said.

The draft declaration focuses on tackling the expansion of terrorism and violent extremism in Africa, on supporting women and youth through job creation and education, and on establishing healthcare systems to enhance the quality of life.