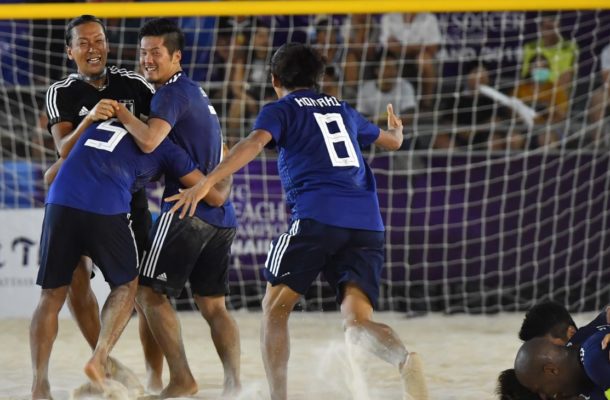 Pattaya: Japan came from two goals down to secure a place in the AFC Beach Soccer Championship Thailand 2019 semi-finals, after earning a stunning 3-2 extra time win against defending champions Islamic Republic of Iran on Thursday.


A 38th minute free-kick from Takuya Akaguma decided what was a sensational, see-sawing match, after the Continental heavyweights were locked at 2-2 at the end of regulation time.

The loss comes as a crushing blow to Iran, who will miss the FIFA Beach Soccer World Cup after having qualified for seven of the last eight editions, and finishing third in 2017.

Fans had been anticipating a match to remember between the two Asian giants, and it certainly began in memorable style, with Masanori Okuyama stealing the ball from Iranian goalkeeper Hamid Behzadpour in the first passage of play of the game, only to miss the empty net that awaited.

It was a missed opportunity that Japan would come to rue, particularly when Mahdi Shirmohammadi blasted in the opening goal from a free-kick after being fouled by Naoya Matsuo in the ninth minute.

Iran extended their lead in the very next minute, with a wild bounce off the sand rendering goalkeeper Shingo Terukina helpless, and allowing Mohammad Moradi to make it 2-0, with only the upright stopping Moradi from adding a third goal before the first break.

But just when Ruy Ramos' Japan looked to be heading for a second successive scoreless period, Shusei Yamauchi popped up to force home his seventh goal of the tournament, and have the East Asians back to a one-goal deficit in the 21st minute.

Okuyama was unlucky not to square the ledger in the final minute of the period, but his acrobatic bicycle kick crashed into the upright instead of the net to leave the make-or-break tie tantalisingly poised at 2-1 with 12 minutes to play.

Japan had one period to keep their World Cup qualification streak alive, and they took just two final period minutes to draw level, this time through Akaguma, who found space at the back post to score with a header despite a solid touch from Behzadpour.

Iran head coach Marco Octavio introduced shot-stopper Peyman Hosseini into the action for the first time, and he made a superb save to deny Ozu Moreira's free-kick just after Mirshekari thundered a sensational bicycle kick into the crossbar with just six minutes to go.

It was frenetic, dramatic and superbly entertaining action, as both sides fought to stay in the competition, with Japan producing the vast majority of late attacks as the match went into extra-time.

The late Japanese dominance continued into extra time, and it paid dividends when Akaguma steered home a free-kick in the 38th minute to give them the lead for the first time in the match, sealing a priceless and unforgettable win for the East Asians.

"We knew it was going to be a difficult game. As we analysed their team, we knew they had a suspended player and some injuries, and for both of us, it wasn't ever going to be an easy game. We made it difficult for ourselves at the start. We made many mistakes and we weren't calm. After Iran's first goal, the players started to rush, which made it more difficult. We thought we'd play Iran after we'd booked our ticket to the World Cup, and the players were nervous against such a tough opponent."

"This is a match that could have been the match for the final. These are technically the best teams of Asia. I have to say congratulations to the Japanese team, and I want to say thank you very much to my brave players."Source: the-afc.com