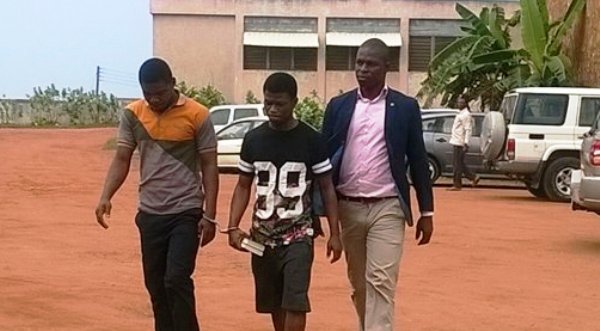 The 19-year-old man standing trial for the murder of late Member of Parliament for Abuakwa North in a remorseful state appeared in court with copies of two Bibles in hand. Daniel Asiedu in almost all his utterances at an Accra District Court on Friday mentioned the name of God in a hope to convince the court that he is a changed man. He was in a black shirt with paintings in front and two white stripes on the arm over black sweat pants when he arrived in the company of the second suspect and a Police CID.

The second accused, Vincent Bosso who looked indifferent was in a nude coloured polo shirt over black trousers. The two sat quietly next to each other with cuffs on their two wrists and bent down their heads and whispered to each other at certain point.

The substantive prosecutor, Chief Superintendent Francis Baah and lawyer for the accused, Augustine Obuor did not show up at the court on Friday. In the absence of the prosecutor, Isaac Agbemehia held the brief and the case was adjourned to August 19, 2016 by the presiding judge Stephen Owusu.