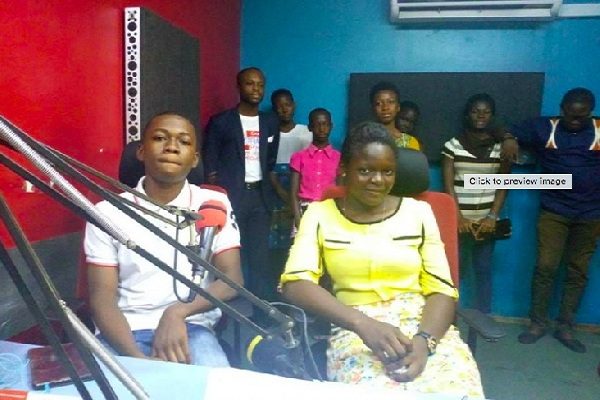 The morning show on Rainbow Radio 87.5Fm, Frontline took a new twist Monday morning after host of the show; Kwame Tutu gave opportunity to some junior high school graduates from Glorious Child School Limited to express their views on governance and politics in Ghana.

The political views held by these minors ranged from politics of inclusion, the double-track system, governance and child related policies.

Representing the pupils and graduates, Sephora Naa Korshie Lamptey and Ebenezer Okoe Ayittey expressed their varied views on how the current administration and government in the future can help manage the country.

Sephora Naa Korshie Lamptey touching on inclusive governance underscored the need for politicians in opposition to focus on solutions instead of praying for the failure of the government. The pull him down syndrome she lamented does not only affect the government but Ghanaians in general.

Sephora told the host she follows what goes in the country through the media especially the stories on politics and governance. When asked the latest issue she has followed and generated interest, she mentioned the latest idiomatic expression used by President Akufo-Addo when he reacted to corruption tag on him and his family.

Speaking at a recent event organized by Auditors in the sub-region, the president said: “I’m aware that you give a dog a bad name in order to hang it but this dog [reference to himself] will not be hanged.’’

Reacting to it, the 15 year-old said; ‘’we [voters] went to the polling station to vote for the president and so we should work hand in hand with the president to achieve the goals he has for us and not to sit back and be pointing fingers at [the] wrong mistakes he had made.’’ ‘

’We are imperfect human beings and we are bound to make mistakes but from the mistakes, we learn the new way to go…We should help one another and help the country move forward so we have a better place.’’

She also opined that, not every promise by politicians would see the light of day. She however, advised politicians to be circumspective and desist from making promises they know they would be unable to fulfill. On his part, Okoe Ayittey expressed his disgust at the number of ambulances serving the over 28 million

Ghanaians and added that, ‘’the Ghana Beyond Aid’’ cannot be possible with the number of ambulances serving Ghanaians. He could not understand why Ghanaians will pay taxes and yet, our leaders are unable to serve Ghanaians by purchasing more ambulances.

He also lamented the views of children are not taken when policies are being formulated. Touching on the double-track system, he said, the new policy would not be beneficial to students. He also touched on the role of the media and how important its work is shaping society.

To him, the media represents an organization that speaks to people who are the shakers and movers of society. The 15 year-old JHS graduate who is an aspiring media personnel, believes the media would have to play its watchdog role effectively to ensure a better society.

Their headmaster of the School, Edem Kojo Opare accompanied the pupils and graduates in the company of other teachers.