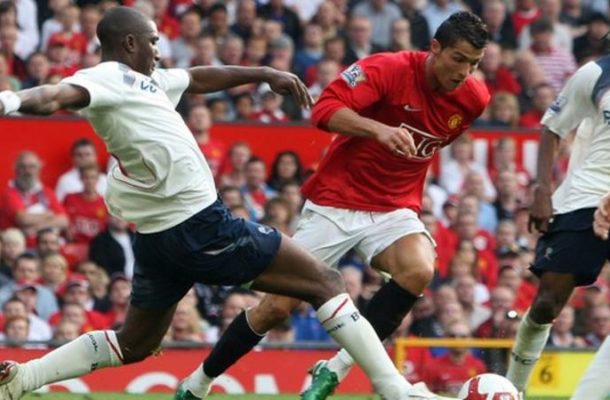 Former Aston Villa and Bolton defender Jlloyd Samuel has died in a car crash in Cheshire.
The 37-year-old, most recently player-manager of non-league side Egerton, died on Tuesday.

The Trinidad and Tobago Football Association said he had "collided with an oncoming vehicle".

"We are deeply saddened to hear of the death of our former player Jlloyd Samuel at the age of just 37 in a car accident," Championship side Villa said on Twitter.

"Our players will wear black armbands as a mark of respect tonight [in their play-off semi-final] and our thoughts are with his friends and family at this very difficult time."

Samuel won two international caps for Trinidad and Tobago, and also played club football in Iran between 2011 and 2015.

The Trinidad and Tobago FA continued on Facebook: "We've received some terrible news that former national defender and ex-Aston Villa and Bolton Wanderers player Jlloyd Samuel died in a car crash this morning in England.

"According to reports, Jlloyd was returning home after dropping his kids off to school and collided with an oncoming vehicle.

Cheshire Police said they were called to a serious collision involving a van and a Range Rover in High Legh, Cheshire at 07:55 BST.

"Sadly the driver of the car, Jlloyd Samuel, 37, from Lymm, died at the scene," they said in a statement.

"His next of kin have been informed and are currently being supported by specially trained officers.

"The driver of the van, a 54-year-old man, sustained serious injuries and has been taken to hospital for treatment."

Manchester United defender Ashley Young: "Absolutely gutted to hear the news of the passing of Jlloyd Samuel. Took me under his wing when I joined Villa and helped me settle. Such a good guy on and off the pitch and a truly good friend."

Bolton Wanderers: "Everybody associated with Bolton Wanderers Football Club is deeply saddened to learn of the passing of our former defender, Jlloyd Samuel.

"Rest in peace, Jlloyd. Our deepest condolences are with his family and friends at this difficult time."

Cardiff City: "We are deeply saddened to hear of the passing of former Cardiff City defender, Jlloyd Samuel. Our thoughts are with his friends and family at this incredibly difficult time."

Charlton Athletic: "The club are deeply saddened to learn of the passing of Jlloyd Samuel, who began his career in Charlton's youth system. The thoughts of everyone at the club are with his family and friends at this difficult time."

Players' union, the PFA: "Our sincere condolences go out to the family and friends of Jlloyd Samuel who has died aged 37."

Former team-mate and Liverpool academy coach Michael Beale said: "Absolutely heartbroken to hear of the passing of my childhood friend and team-mate. A beautiful person."