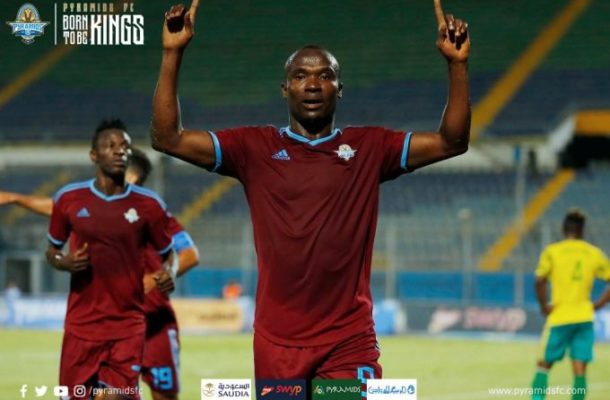 Ghanaian International John Antwi stole the headlines on Saturday as he grabbed a braced for Egyptian rising force Pyramids Fc in their first ever Confederation Cup game against  Etoile du Congo which they won 4-1.

John Antwi broke the deadlock in the 19th minute after connecting with a fine cross from Abdallah El-Said.

Then Ghanaian striker grabbed his brace after powering a header from inside the box on the left hand side of the keeper in the 33rd minute.

The visitors pulled one back as Bienvenue Kombo scored in the 86th minute following a defensive blunder to throw a lifeline for the Congolese.

But substitute striker Ahmed Ali converted a penalty kick in injury time that he earned himself after being brought down in the area.

Pyramids FC, who splashed millions of dollars last season to rebuilt their squad, finished third in the league behind Ahly and Zamalek.

The return-leg will take place on August 24 in Brazzaville, the Congolese side will need to win by a scoreline of 3-0 in order to progress to the next stage.