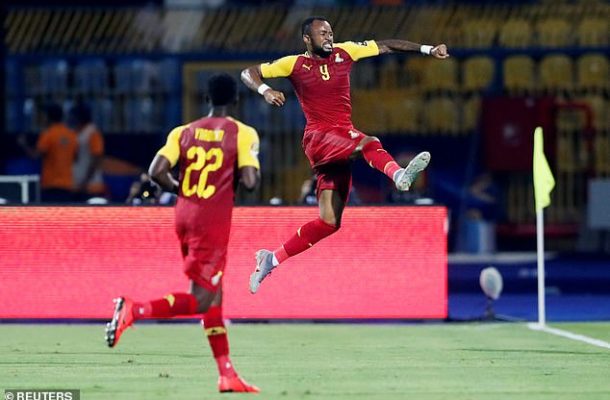 Ghanaian duo Jordan Ayew and John Boye been named in a list of Eleven Best African players of week in Europe.

Released every  Tuesday,  the team compiled  before the stop of several European championships because of the sanitary measures taken by the various governments relating to the epidemic of the coronavirus.

For the second time in less than a month, Crystal Palace won (1-0) thanks to a realization by Jordan Ayew. Author of a nice solo number, the former Marseillais thus finds the way of the nets for the eighth time of the season, joining Anthony Yeboah at the head of the best Ghanaian scorers in the history of the Premier League.

Jordan who plays his football with English Premier League club Crystal Palace has been exceptional since the season commenced. After making 28 appearances, the Black Stars asset has chipped in with 8 goals and an assist, making him one of the best players for the side.

His compatriot John Boye plays for FC Metz in the French Ligue 1 and is one of the best defenders in the competition this season. He has been a rock at the back for the club and has earned applauds from pundits for his outstanding displays.

The U20 African champion with the Aiglons of Mali, leads the offensive line of this African type team alongside the Nigerian from Lille, Victor Osimhen.

If he could not prevent Nîmes from equalizing a time, Alexandre Oukidja still made a good copy against the Gardois (2-1). Author of six parades, the Franco-Algerian played his part in the precious victory of his team.

Achraf Hakimi (Morocco - Borussia Dortmund)
Achraf Hakimi scored the winning goal for Borussia Dortmund (1-2), on the field of Borussia Mönchengladbach. Shifted to the right of the surface, the Moroccan went off to score with a crossed strike, with control and composure. John Boye (Ghana - Metz)
Despite a complicated end to the match, FC Metz won thanks to John Boye a crucial match for the maintenance against Nîmes (2-1). Excellent in duels during the match, the native of Accra placed a whim which brings big returns to the Grenats. Nayef Aguerd (Morocco - Dijon)
Author of a serious match against Toulouse (2-1), Nayef Aguerd concluded with composure by taking back a ball which dragged following a free kick. The native of Kenitra thus gave his team an important victory in terms of maintenance.

Hamza Mendyl (Morocco - Dijon)
Very hard-hitting in his lane throughout the game, Hamza Mendyl opened the scoring against Toulouse (2-1), taking a center from the other wing, unlocking the line counter Dijon back in Ligue 1 this season.

Jordan Ayew (Ghana - Crystal Palace)
For the second time in less than a month, Crystal Palace won (1-0) thanks to a realization by Jordan Ayew. Author of a nice solo number, the former Marseillais thus finds the way of the nets for the eighth time of the season, joining Anthony Yeboah at the head of the best Ghanaian scorers in the history of the Premier League. Bongani Zungu (South Africa - Amiens)
If Amiens snatched a good point in Marseille at the finish (2-2), Bongani Zungu is no stranger to it. Combative at will, the South African halted many adverse actions and recovered a good number of balloons to end up reigning over the midfield. Moreto Cassama (Guinea-Bissau - Reims)
Moretto Cassama could have opened the scoring from the 4th minute of play if his attempt had not been rejected by the Brest cross. With 94% of successful passes and a presence in the heart of the game, the former FC Porto reserve has nonetheless made an excellent copy. Sadio Mané (Senegal - Liverpool)
While Liverpool was led by Bournemouth, Sadio Mané handed the Reds over. First passer for Mohamed Salah on equalization, the Senegalese himself scored the victory goal (2-1) on a deep service from Van Dijk.

Victor Osimhen (Nigeria - Lille)
Very solid and available on the attacking front, Victor Osimhen gave a bad evening to the defenders of Olympique Lyonnais. Fast, impregnable in depth, the Nigerian freed up many spaces for his partner Loïc Rémy, author of the victory goal (1-0). El Bilal Touré (Mali-Reims)
El Bilal Touré scored against Brest (1-0) his third goal in Ligue 1 at the reception of a center at the far post of his compatriot Moussa Doumbia. Arrived at the Reims stadium to strengthen his reserve team, the African champion U20 burns the stages.