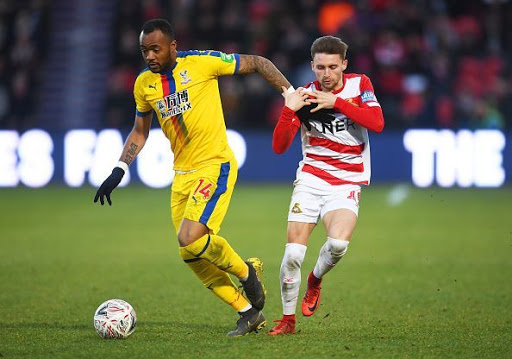 Jordan Ayew is a football player from Ghana. He plays at the forward position. Currently he plays for Crystal Palace, who sit 14th in the EPL Table, on loan from Swansea and the Ghana national team. He is the son of former Ghana captain Abedi Pele and brother of André Ayew, who plays for Fenerbahçe.

The Ghanian is one of those rare breeds who has carved a niche for himself despite finding himself in difficult situations most of the time.

His record in EPL Fixtures speaks for himself. Ayew has been an integral part of the Ghana national team since he made it the 25 man squad for the Africa Cup of Nations in 2012.

He is capable of playing all along the front line, comfortable on the left or right, but mostly plays as the central striker. His problem is he doesn’t really have any one facet to his game which stands out. He’s fast, but not lightning quick.

He can finish, but not nearly as accurately for a top striker and he’s not tall enough, or physically strong enough to be a target man. Jordan is very impressive with the ball at his feet.

He is capable with both his left and his right, so he does split the field very easily with utmost ease. It is this facet of his game which often shadows his other dirty antics, like frequent fouling which earns him yellow cards in almost every second game. Though he is 27, this is one aspect which still needs to be looked at.

Ayew is the son of former Ghana captain Abedi Pele. Abedi is considered to be one of the pioneers of African football. Pele is currently into coaching in managing. Jordan grew up playing football from a very early age, with his elder brother Andre, 29.

When older brother André Ayew burst on the scene a few years ago, Jordan was playing for Marseille’s youth teams, and the reports were that Jordan was perhaps the more talented of the Ghanaian brothers.

However, things weren't as easy as it seemed to be. He had hard times in making it the final 11, and whenever he made it, goals were hard to come by.

However the only thing on his side was age, which allowed him plenty of time to develop. This gave him the impetus to make it big in due course of time.

In his 98 appearances in the Premier League, Ayew has scored 16 goals and has 7 assists to his name. Ayew joined Marseille as a trainee in 2006.

He signed a three-year professional contract with Marseille in 2009. Jordan made his debut for the senior team on 16 December 2009 and scored in his very first match.Marseille went on to win the match 2–1.

Ayew scored his second goal against Nice at the Stade Vélodrome on 27 April 2011 in a match where elder brother Andre scored a hat-trick.

On 1 November 2011, Jordan and André both played their first  UEFA Champions League match against Arsenal. He soon joined Ligue 1 rivals Sochaux on a loan deal until the end of the 2013–14 season.

In July, 2014 Jordan signed a four year deal with Lorient. In July 2015, Ayew joined Aston Villa on a five-year deal for an undisclosed fee, reported to be in the region of £8 million.

He scored his first goal for the club on 24 October 2015 against his elder brother's club, Swansea City, in the 62nd minute. Ayew ended the season as their top scorer, though Aston Villa got relegated.

In January 2017. Jordan joined Swansea City in exchange of Neil Taylor from Wales.

Currently, Ayew plays for Crystal Palace in the Premier League. He joined them on loan for the 2018-19 season.

In December 2011, Ayew was named to the Ghana national team provisional 25-man squad for the 2012 Africa Cup of Nations, and in January 2012 he was selected for the tournament's 23-man squad.

In June 2014, he was included in the Ghanaian squad for the 2014 World Cup. In Ghana's last warm-up match before the 2014 FIFA World Cup in Brazil on 9 June 2014, Ayew came on as a first-half substitute for the injured Majeed Waris and ended up scoring a hat-trick in a 4–0 victory over South Korea.

Jordan Ayew was part of the 2015 Africa Cup of Nations team in Equatorial Guinea that took a silver medal as result of losing out to Ivory Coast on a penalty shoot out whom they clinch the African Cup, which occurred on 8 February 2015.

Currently he is one the well known names in African football. His slick game play and style has been evident that he will go down as one of the best players to come from the continent.

Plus, his Premier League stats have also shown that he is a player who will be remembered in years to come.