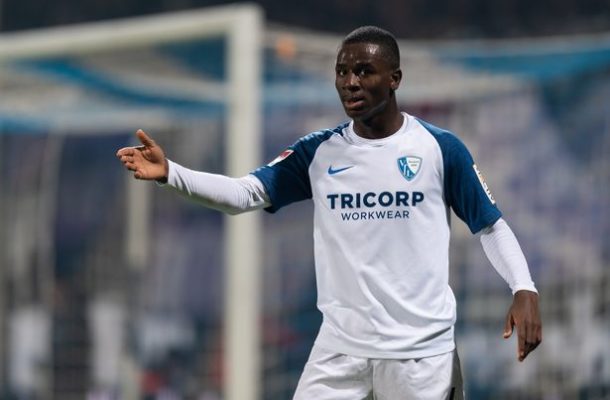 Jordi Osei-Tutu is back at VfL Bochum but did not play in the friendly game against Wuppertaler SV as it came too soon and he is yet to train with his new side.

VfL Bochum started the friendly phase with a win. At regional league Wuppertaler SV there was a 2-0 for Thomas Reis' team.

The Bundesliga club 's first friendly at Wuppertaler SV showed the color of one of the three jerseys that coach Thomas Reis' team will wear in the second season after being promoted.

The concrete-colored one with thin blue stripes on the collar and sleeves will be the third, i.e. the third kit. Otherwise, there was little enlightening in terms of staff and style of play for the coming season.

Of the players who should again reach the goal of staying up, only five were there. This explains why the game was of a manageable level in front of 2,200 spectators in the Wuppertal Stadium at the Zoo. After all, there was not only concrete on both sides, but two goals. One early and one late. Both were scored by VfL Bochum, who won 2-0 (1-0).

Coach Reis had more youngsters, potential supplements and players who were probably still to be sold than possible regular players in the squad. Accordingly, it was difficult in advance to predict a more precise positioning on the field.

It had already become apparent during the training week that Paul Grave and Michael Esser would share the task in goal. Regular Manuel Riemann was present at the start of training on Monday, from Thursday he was absent from the units and trained individually. Grave started, Esser came after the change.

The defense in the first round was formed by Mohammed Tolba and Moritz Römling on the outside, Tim Oermann and Vasilios Lampropoulos on the inside. For midfield and attack, Reis initially offered Anthony Losilla, Nico Böll, Luis Hartwig, Tarsis Bonga, Adam Tolba and Philipp Hofmann as center forwards.

He then fitted in in a way that couldn't be better. With his first contact in a game for VfL, he immediately scored a goal. Bonga had crossed from the penalty area, Hofmann hit his head to make it 1-0, four minutes hadn't even been played.

Wuppertal's best chance ended on Grave's left arm. Shortly before the change of sides, he saved the ball from former VfL professional Marco Stiepermann and thus prevented the - performance-related - 1:1.

Reis made six changes for the second section. The average age of the team went down a bit with the removal of Losilla. Reis brought on Michael Esser for the goal, along with Cristian Gamboa, Lennart Koerdt, Mats Pannewig, Simon Zoller and Silvere Ganvoula.

Ganvoula had the first Bochum goal with a free kick after 54 minutes, a little later Zoller came to the conclusion, then Pannewig. The U19 player was Bochum's most conspicuous player for long stretches of the second half. He again confirmed his talent.

How the U19 players used did not fall off with their performances. So that was perhaps the greatest realization for VfL that day after the first test. The U19s could play a good role in the Bundesliga West next season. At least the U19 central defense with Oermann and Mohammed Tolba didn't concede a goal against a regional league team.

Ganvoula then also put an exclamation mark. After Zoller was put down, he scored to make it 2-0 three minutes before the end.

In the end, Thomas Reis' wish that no player should get injured was also fulfilled. The VfL pros have Sunday off, on Monday the second week of training begins with friendlies against two Lower Rhine Oberliga teams. On Wednesday VfL plays at 1. FC Monheim, on Saturday at 1. FC Bocholt.

The U19 players will then no longer fill the training and game squad. Some national players are expected back, and Kevin Stöger could start training.