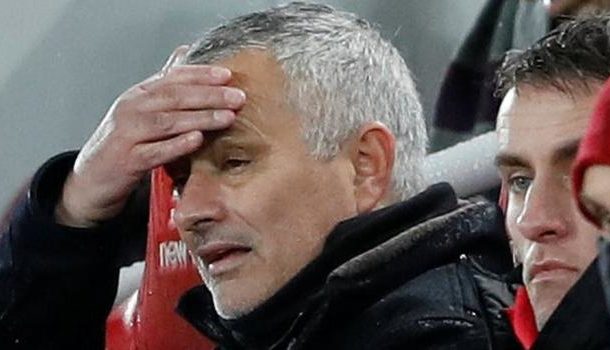 Jose Mourinho's agent made a rare public statement recently to insist Manchester United are "very happy" with their manager. If that is the case, the only conclusion to reach is they are easily pleased at Old Trafford these days.
United's negative, lame performance in their 3-1 defeat at Liverpool carried all the ominous hallmarks of a broken team and the unmistakeable sense of Mourinho's managerial reign reaching an inevitable conclusion.
Mourinho's job may not be in imminent danger but it takes a huge leap of imagination, or a transformation that currently looks impossible, to see the decorated Portuguese manager at the club beyond this season.

United have fallen 19 points behind Liverpool before Christmas, and Mourinho's confidence that they will bridge an 11-point gap to Chelsea in fourth is a very optimistic, arguably unrealistic, view based on this grim evidence.
If, as agent Jorge Mendes claims, United's hierarchy are "very happy" with Mourinho's work, then times, targets and ambitions have changed beyond all recognition at the 'Theatre of Dreams'.


"Mourinho's morose demeanour is the sharpest contrast to Klopp's driven, animated style and the German currently possesses the managerial Midas Touch"In fairness, United's loss should be placed in context. They were facing a rampant Liverpool team who are unbeaten at the top of the Premier League, and they were within 17 minutes of joining Manchester City as the only team to take points away from Anfield this season.
Mourinho will also point to the fact United's board were unable to deliver the central defender he wanted in the summer, but there are clearly deep-rooted problems within his squad. For all the failings in the transfer market, he is not getting the best from the players he does have.
Mourinho and United are judged when placed alongside Liverpool and in games like this. On this occasion, the whole mood, performance and attitude of the two teams and managers were light years apart.
And this drives at the heart of Mourinho and United's desperate malaise.
Mourinho's morose demeanour is the sharpest contrast to Klopp's driven, animated style and it is the German who currently possesses the managerial Midas touch.
United were in bunker mode from the moment their teamsheet landed, a ploy that was failing miserably until Alisson presented Jesse Lingard with an unlikely equaliser.
Their current ambition is now reduced to tilting at the top four and a cup run, but their stock has fallen so far they are now a side other clubs will want to be paired with in Monday's draw for the last 16 of the Champions League.
The succession of sub-plots swirling around Mourinho only add to the growing conviction he is now simply marking time until the end of his reign.
The biggest one surrounds Paul Pogba, an £89m signing who was not trusted to start in a game that has long been the acid test of the character and ability of United's players.
True, Pogba has not delivered in the manner expected but it is a brutal reflection of his current standing that not only did he fail to start a game of such importance but that he also remained glued to his seat once the tide had swung against United late on.
Nemanja Matic and Marouane Fellaini, when he came on for the second half, provide the sort of muscle and physical presence Mourinho believes he needs but they also sum up a United stripped of all imagination, only posing a danger when it was presented to them by Alisson.
Pogba must have watched mystified as to how he cannot win a place in this team.
These are the sort of games he was signed for, the sort of games he will have wanted to shape when he returned to United from Juventus, and yet his manager did not feel this was an occasion for him. It is a damning verdict but also begs questions as to why Mourinho cannot bring more out of an unquestionably gifted individual with a World Cup winners' medal with France to his name.
Mourinho's United were, at the home of a Liverpool side heading in the opposite direction, creatively bankrupt and shackled to a spoilers' gameplan alien to the club's traditions.
And the responsibility must lie with a manager who no longer looks like he is enjoying life at Old Trafford.


Reports have suggested midfielder Paul Pogba could leave Old Trafford in JanuaryWhereas Klopp adopted a strategy with an element of risk when he introduced the gifted match-winner Xherdan Shaqiri, Mourinho kept back Anthony Martial - arguably United's best forward this season - until it was too late.
And once again Romelu Lukaku, another of Mourinho's hugely expensive signings at £75m from Everton, cut a disconsolate struggling figure grasping for old form.
Fred, a £52m summer signing from Shakhtar Donetsk, was not even allowed the ignominy of sitting alongside Pogba on the bench. He has, for now at least, disappeared from view.
Mourinho's decision to put Pogba on the bench and not even include Fred in his matchday 18 hardly strengthens his bargaining hand if he wants to demand more new faces.
Everything about Manchester United currently screams of a joyless experience. Watching them. Playing for them. Managing them.
This was a game that carried heavy significance.
If Mourinho and United had come to Liverpool and made a statement it might have signposted a brighter future. It might have suggested there was some light at the end of a very dark tunnel.
Instead, the chasm between the clubs was brutally laid bare by a Liverpool team playing the sort of football United and their supporters, who suffered the inevitable taunts of The Kop in buoyant mood, can only watch with envy.
Liverpool are also led by a manager who carries his entire squad with him while Mourinho looks like the discontented captain of a very unhappy ship.
And this is why the overwhelming feeling at the end of this game was that it is now not a question of if Mourinho's reign will end, but when it will.
Mourinho may be able to limp on helped by a lack of immediate alternatives but the clouds are building up around United and their manager. There were no rays of sunshine on this desperate night at Anfield.
This felt like the beginning of the end for Mourinho at Manchester United.Source: bbc.com