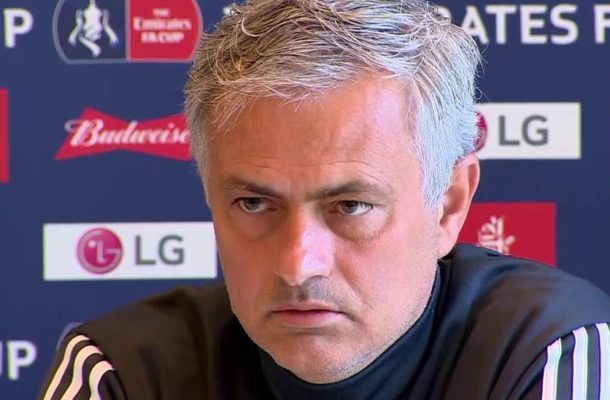 Manchester United manager Jose Mourinho says their season will not be judged on the outcome of Saturday's FA Cup final.
United finished second in the Premier League - their highest placing since the 2012-13 season - but will be without silverware this season if they fail to defeat final opponents Chelsea.

You think 6-0 is entertaining? I don't think so

"I'm not going to change my analysis of the season because of one match," Mourinho said in a news conference on Friday.

"You can analyse the way you want to."

The former Blues manager has won 12 cup competitions during his club career. And in his first season in charge at Old Trafford, Mourinho guided United to two finals, the Europa League and League Cup, winning both.

However, the United boss said his record was irrelevant going into the Wembley encounter.

"I think the winning mentality doesn't have to do with records or history in finals," he added.

"I honestly think what we did in the past has nothing to do with tomorrow and the records don't matter. What matters is 11 against 11 and everybody trying to give their best."

Contests between the two finalists have been tight in recent years with only three or more goals scored on three occasions in the past 13 meetings.

When asked whether Saturday's clash will be an open game, Mourinho said: "I still don't understand these words of 'entertaining'. You think 6-0 is entertaining? I don't think so."

"That for me as a football lover is entertaining, so I think so it's going to be entertaining."


The two managers have endured a fractious relationship dating back to October 2016, Conte's first season in England, with the Italian describing his counterpart as "a little man" in January following a barbed exchange in the media.

Conte insisted the situation between them was not an issue, claiming: "This is not important what happened. There is a relationship between me and him.

"Tomorrow I will shake his hand and both of us will think of the game."

Conte lost last year's Cup final - and the chance to record a double in his first season - with a 2-1 defeat against Arsenal, a game he described as "strange."

This year, his team's defence of the Premier League title resulted in a fifth-placed finish, 30 points behind champions Manchester City, and the 48-year-old former Juventus boss, who is aiming to avoid a third domestic cup final defeat in his managerial career, said: "We deserve to have this chance, to win an important trophy.

"We have to fight against a really good team and we want to fight, want to try to win the game, to lift the trophy."

Conte has been tipped to leave Chelsea this summer and teased the assembled media by declaring: "I can say for sure this will be my last match, this season.

"For sure, I think we must be focused on tomorrow's game. For us this game is very important because we have in a difficult season (the chance) to finish the season with a trophy."