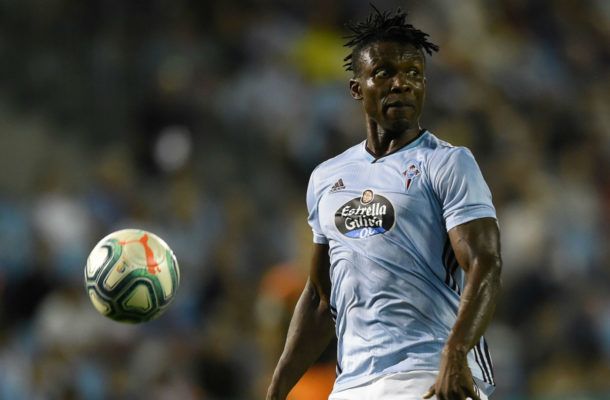 Like all his teammates at Celta Vigo in recent weeks, Joseph Aidoo has found himself adapting to the requirements of a new manager. When the 25-year-old central defender last reported for international duty with Ghana, his club side was mired in a relegation battle. Since returning to action in Spain, they have enjoyed a dramatic improvement in fortunes.

Aidoo joined Celta Vigo from Belgian outfit Genk back in July 2019, penning a five-year contract with the Spanish club, who reportedly spent €8 million to sign the powerful defender. He also became one of the most important centra-backs in the team, making 32 appearances in LaLiga last season with 2,499 total minutes on the pitch.

However, while Celta Vigo started the 2019-20 campaign with high hopes, results weren’t forthcoming, which soon cost manager Fran Escribá his job. His replacement in November 2019 was Óscar García, the former Barcelona midfielder with a wealth of coaching experience around Europe. Nevertheless, the team continued to struggle and only just avoided relegation, finishing the season 17th in the table.

Heading into the 2020-21 season, expectations were clearly much higher at Celta Vigo. However, following the 1-1 draw against Elche at the start of November, Óscar García was fired with just one win in the opening nine games of the campaign. Immediately afterwards, Aidoo played for Ghana in the African Cup of Nations qualifiers against Sudan. Upon returning to Spain, his club had already moved swiftly to appoint a new manager.

The club had turned to Eduardo Coudet, an Argentine coach who had played for Celta Vigo briefly in 2002. Although his first game at the helm resulted in a 4-2 defeat away at Sevilla, the overall performance from the team was notably better. That said, the core central defensive duo of Aidoo and Jeison Murillo continued to struggle.

Coudet opted for changes in the next two games, and while Murillo kept his place in the starting eleven as the left centre-back, Aidoo was dropped to the bench in favour of Néstor Araújo. Celta Vigo won both games, beating high-flying Granada 3-1 at home, then Athletic Bilbao 0-2 away. These were priceless results, lifting the team out of the bottom three.

Nevertheless, looking at the latest Spanish football betting odds for Celta Vigo, they are still priced as 8/1 candidates for relegation from LaLiga. The immediate objective for Coudet is to keep the momentum of his team going, especially given the minimal gap in points between league positions. Meanwhile, the task for Aidoo will be to earn the confidence of his new manager.

Coudet appears to be flexible tactically, switching between using two and three central defenders. Over the coming weeks and months, Aidoo will need to battle to get his place back in the starting eleven, given that Celta Vigo have plenty of options in the squad. With six players capable of playing in the centre-back roles, there’s a lot of competition.

That said, Aidoo has always been capable of rising to the challenge. After winning the Defender of the Year award with Inter Allies in the Ghana Premier League, this is a player who has taken great strides in his career. From the first European experience with Hammarby in Sweden to blossoming with Genk in Belgium, followed by the big move to Celta Vigo; Aidoo has always been ready to prove his worth.