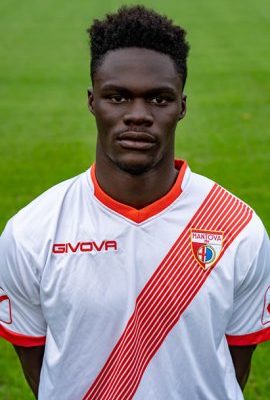 Ekuban, owned by Hellas Verona, just returned from a loan deal with Serbian giants Partizan Belgrade, where he failed to glitter.

He only managed to play only two games for the Serbian side after joining them in the beginning of the 2019/20 season.

His return to Italy comes in as rescue to his career after being labelled a "failure" in the Serbian league.

The announcement of the agreement was made by the Italian club on the official website.

"Virtus Francavilla Calcio announces that it has acquired the rights to sport shows, until June 2022, of the 2000 class striker Joseph Ansah Ekuban, arrived from FC Hellas Verona Spa."

The 20-year-old younger brother of Black Stars forward Caleb Ekuban is expected to gain some first-team football before returning to Verona.

The Ghanaian footballer, just like his senior brother Caleb, grew up in the La Scala youth sector and played for Mantova in the Serie D.

According Virtus Francavilla, the 19-year-old striker is already available to coach Bruno Trocini for the trip to Reggio Calabria.