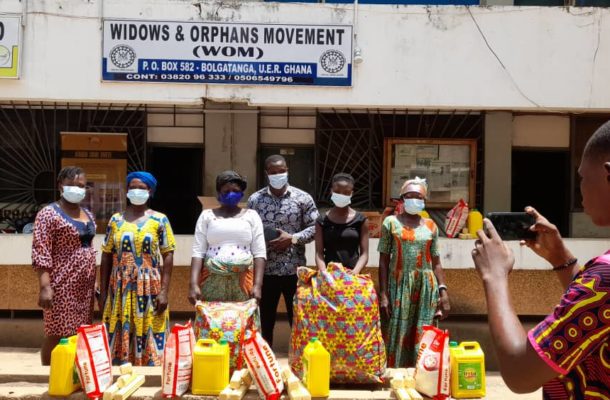 Word FM’s English morning show host, Simon Agana, has donated food items and toiletries bought with his monthly earnings to some deprived widows and orphans in the Upper East Region.

The broadcaster also made an emphatic call to everyone to not look the other way wherever they found any needy individuals or groups around them as he presented the items on Friday in the regional capital, Bolgatanga.

“The purpose of this donation,” he remarked at a brief donation ceremony, “is to put a smile on somebody’s face.”

The host of the Word Community Watch Show said the thought about supporting the needy initially had struck him with an idea to distribute only fairly used clothes among them. Later, he felt providing clothes, without food, would be incomplete.

“I thought that it would be unwise just to distribute the used clothes. So, I needed to still gather some small money to be able to buy the food items in addition for our mothers (the widows). Everything that is here is coming from my small salary, from my pocket. I decided to sacrifice my salary to put a smile on these faces because that is a good cause— that is what we’ve been commanded to do,” he said.

Forming a League of Caring Journalists

It is uncommon for journalists in most parts of Africa (Ghana included) to financially support the needy, with many media practitioners themselves being described on the continent as ‘HIPC’— Heavily Indebted Poor Correspondents— because they do not earn much.

The acronym ‘HIPC’ originally was coined from the popular term “Heavily Indebted Poor Countries” in reference to some 39 developing countries that qualify for special assistance from the World Bank and the International Monetary Fund (IMF) owing to their high levels of poverty and heavy debts.

Nonetheless, a wind of charity awakening, rooted in what is labelled as the call of duty, occasionally blows through Ghana’s ‘media-scape’ where some journalists feel the need to also provide for the people they speak for. Before the Friday’s donation, there had been similar donations in times past from some media practitioners in the Upper East Region— an area dotted with about 20 radio stations today.

GhanaWeb’s Castro Senyalah had fed and clothed some mentally ill persons in the streets of Navrongo and in the border town of Paga a number of times, a charity effort Apex News Ghana’s Chidozie Stephen Ngams similarly made in Bolgatanga. Metro TV’s Francis Dabang and the Herald’s Haruna Sumaila Abugri have plans to support a group of Burkinabe citizens (including women and children) who fled to Ghana after a terrorist group attacked a community in the French-speaking country in 2020. And Word FM’s Gaspard Ayuureneeya supports vulnerable persons with food each time he harvests from a small farm he owns in his hometown.

There are other journalists in the deprived region who consistently have gone out of their way to support underprivileged people. Simon Agana thinks it is about time like-minded members of the Fourth Estate worked together on a common charity cause.

“God willing, by next year, we will come back, possibly bigger than this. And I’m going to sell the idea to colleagues who think that it’s necessary to do this. Next year, I will not be the only one to present this. We will be many. It will be better. It will be bigger,” he assured.

A representative of the beneficiaries, Nsohmaa Nyaaba, and the Director of the Widows and Orphans Movement (WOM), Fati Abigail Abdulai, received the items with gratitude on behalf of the widows and the orphans a number of whom attended the ceremony.