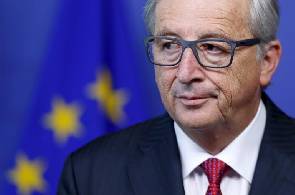 The European Union needs a military headquarters to work towards a common military force, the Commission president has told MEPs in Strasbourg.

Jean-Claude Juncker said the lack of a "permanent structure" resulted in money being wasted on missions.

Part of his annual state of the union address was devoted to the UK's unexpected vote to leave the EU.

He insisted that the bloc was not at risk and urged Brexit negotiations to take place as quickly as possible.

The Brexit vote has given added impetus to plans for greater defence co-operation, because the UK has always objected to the potential conflict of interest with Nato.

But Mr Juncker said a common military force "should be in complement to Nato". "More defence in Europe doesn't mean less transatlantic solidarity."

A European Defence Fund would stimulate military research and development, he said.

Why a military HQ?

All EU members have military forces; most are also members of Nato; and several have extensive experience of operations abroad, from peace-keeping to war-fighting.

The real question is how to organise these component parts to get greater security. Mr Juncker insists that the EU must have a role here.

He wants to improve EU command and control facilities and appears to be suggesting that EU civil and military aspects of a given mission should be run out of the same headquarters.

He also insists that whatever the EU does it should not detract from Nato. But defence resources are finite. His critics will say nothing should be done that duplicates existing Nato activities, as that sends a signal of disarray in Western ranks to Moscow.

On Brexit, Mr Juncker warned that the UK could not expect selective "a la carte" access to the internal market without accepting free movement of people.

The single market has dominated the Brexit debate in the UK.

Prime Minister Theresa May distanced herself last week from remarks by Brexit minister David Davis, when he said remaining in the single market would be "very improbable" if it meant giving up control of British borders.

Jean-Claude Juncker and his team agonised over the wording of Wednesday's speech.

The UK's vote to leave the EU is undoubtedly one of the biggest crises the bloc has ever faced but Mr Juncker was determined not to dwell on it.

There were few words on Brexit. His main message: "The European project continues. Let's choose to look forward. Be positive."

Applause resounded around the chamber of the European Parliament but how will the voters outside react?

Are they even listening? The drumbeat of nationalist, Eurosceptic populism reverberates around the continent.

Public trust in the establishment is low - whether traditional politicians, bankers or EU bureaucrats - and Mr Juncker is an unelected president.

The Commission president's state of the union speech - introduced in 2010 - is modelled on the annual speech by the US president and aims to report on the condition of the EU and outline a future legislative agenda.

Mr Juncker admitted the EU was facing an "existential crisis", but he said it had to deliver "concrete results" in response, including:

Maintaining stability and sharing the burden of economic downturn, such as doubling investment in the EU to €500bn (£425bn; $560bn) in the next five years and creating an investment fund for Africa

He urged a renewed focus on the EU as a "driving force that can bring about unification, for instance in Cyprus".

Splits in the Union had left space for "galloping populism," he said, "and we cannot except that, as populism doesn't solve problems, on the contrary populism creates problems".

In a blunt criticism of recent attacks on immigrants in the UK, he said he would "never accept Polish workers being beaten up and harassed on the streets of Essex".

How did MEPs react?

UKIP leader Nigel Farage said it was "the usual recipe: more Europe, in this particular case, more military Europe''
Peter Lundgren of the anti-migrant Sweden Democrats said his country had always been neutral militarily. "We don't want to be forced into this type of military co-operation," he said
But Belgian MEP Guy Verhofstadt, the European Parliament's lead negotiator on Brexit, said the EU still offered the "cure" for "the cancer of nationalism"

Late on Tuesday, the chairman of the summit, European Council President Donald Tusk, warned that the EU should be mindful of its own ambitions in light of the Brexit vote.

"The keys to a healthy balance between the priorities of member states and those of the Union lie in national capitals," Mr Tusk said.

"The institutions should support the priorities as agreed among member states, and not impose their own ones."

That remark contrasted with Mr Juncker's insistence on Wednesday that "too often, national interests are brought to the fore" in Europe.