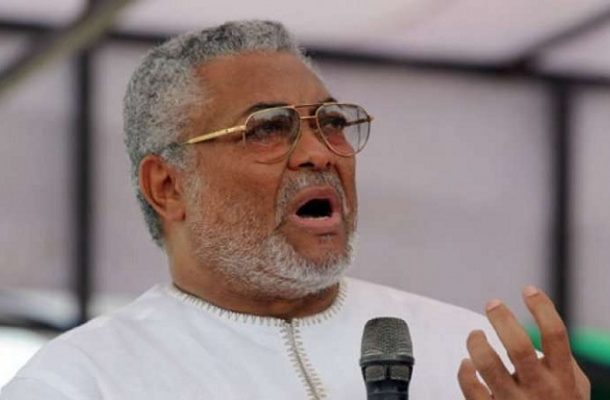 One of the architects of the June 4 Uprising Major [Retired] Osahene Boakye Gyan has come out with some shocking revelations about former President Jerry John Rawlings, 40 years after the 1979 coup d’état.

The coup arose out of a combination of corruption, bad governance, frustration among the general public and lack of discipline and frustrations within the Ghana Armed Forces.

The ex-solider who describes himself as a ‘proper project’ of the revolution, during an interview with Accra based Neat FM Wednesday afternoon indicated that he believes the former President will not die a natural death.

“Rawlings will not die a normal death," quote me anywhere you want to quote me. For all the sins he has committed including the ‘dirty’ monies he has spent and still having a restless soul, it is only God who can punish him”, he told Adakabre Frimpong Manso.

When asked to explain why he said the former military leader will not die a normal death, Osahene Boakye Gyan stated that he would not be surprised if JJ Rawlings goes mad before he dies.

About Rawlings's killing and drowning of Kojo Lee

Narrating the mystery surrounding the death of Flt. Lt. Kojo Lee, Osahene Boakye Gyan said that Kojo Lee was one of the closet Lieutenants of JJ Rawlings.

He said that Rawlings tied some blocks around the legs of Kojo Lee, hanged him on a helicopter and drown him in the ocean.

“I said he hanged Kojo Lee on the helicopter with blocks tied to his legs and drown him in the Atlantic Ocean. That is Rawlings for you,” he said.

Osahene Boakye Gyan indicates that there is more to Kojo Lee’s death but at the appropriate time, he will be coming out with much more details.

He also warned Mr Rawlings to not attack him else all his dark secrets as a military officer and a revolutionist will be spilled out.

“He is too small for me,” Boakye Gyan added.

Osahene Boakye Gyan explained that the late Kojo Lee knew too much about Rawlings therefore the latter was scared that he [Kojo Lee] will expose him. So he [Rawlings] had to eliminate him first to ensure his secrets would not be exposed.

The former military man who indicated that he played a major role in Rawlings’s marriage to Nana Konadu said that Rawlings at the time reported Nana Konadu to his parents that she had gonorrhoea so they should prevent her from visiting him.

“Look let me tell you something that I have never said publicly, Rawlings told the parents of Nana Konadu that she was suffering from gonorrhoea so they should restrain her from coming to see him. Not knowing he [Rawlings] was flirting with a Swiss girlfriend and wanted to break up with Nana Konadu,” Major Boakye Gyan alleged.

He added that during the revolution, we the architects promised ourselves that we were not going to marry from our various tribes or ethnic groups that is why he ended marrying his wife who is from both Ghana and Nigeria and Bannerman married from Northern Ghana.

“Colonel Adei, family doctor for Nana Konadu’s parents was the one I pledged to go and speak to on our behalf because they [Konadu’s family] had vowed to not see us in their family,” he said.

Major Boakye Gyan explained that whilst at Achimota School Rawlings was going out with Nana Konadu but when the time came for them [male friends] to get into respective marriages, he [Rawlings] told me point blank that he couldn’t go back to Nana Konadu, just because of the lies he, Rawlings had told about her.

Major Boakye Gyan indicated further that when they were in the military, JJ Rawlings was failing promotional examinations.

He said he had to use his powers as the chief examiner to make sure Rawlings passed his flying lieutenant exams.

“Had it not been my intervention he would have been sacked from being a flying lieutenant,” he said.

He explained that he did not really award him with any special grades, but as a chief examiner, he was entitled to award 50-50 markers to the officers so it was through that that Rawlings passed. “Like he would have failed woefully.”

“Rawlings at the time had failed promotional exams for six years in a row and because of that his salaries had declined and he nearly got sacked from the army because he dropped somebody’s aircraft on the motorway.”

“I was not at the education department but it happened that I was given the chance to do it. In fact, on paper he [Rawlings] was good but I could not understand why he was not passing his promotional exams,” he noted.

“He owes his flight lieutenant rank to me. I have photocopies of all his failed papers at my disposal,” Boakye Gyan stated.

Osahene Boakye Gyan recalled with some bitterness that after helping Rawlings to pass his exams and rescuing him from the prison after his earlier failed coup, Rawlings ended up killing his [Boakye Gyan's], brother.

He added that he [Boakye Gyan] was not the spokesperson when Rawlings was the military chairman.

He explained that their position was like the position of Edward Akufo-Addo and Kofi Busia but because he [Rawlings] was multiracial Ghanaians hailed him.

Major Boakye Gyan narrated that prior to June 4, many regimes were overthrowing each other so as a military officer he thought it wise that it would be helpful to get some of his colleagues to put an end to the nonsense that was going on at the time.

“All the coup leaders were using academy officers and whoever gets to the Broadcasting House captures everywhere,” he said.

“Obasanjo sent a note advising that he [Rawlings] should arrest and kill all his military friends for that is how coup d’état is done in Nigeria.”

He said, June 4 operations leaked and he [Boakye Gyan] was the one appointed to stop the military officers who were planning it.

Major Boakye Gyan wondered why he was appointed to do such a thing because he was the brain behind the June 4.

He said immediately he was given the orders, he urged his colleagues on and told them that the coup must come on.

He added that at the time, Rawlings had been arrested for his failed coup at the stadium, therefore, he was on detention at the BNI cells so he had to rescue him after June 4.

Major Boakye Gyan stated that the former president has some form of inferiority complex hence his constant attacks on John Mahama and anyone who seems to be doing good works.

The former president has been on the neck of Major Boakye Gyan recently stating that he [Boakye Gyan] did not rescue him whilst in detention.

In response to a Joy News publication, JJ Rawlings stated: “I have given cover to a number of uniformed personnel who were not brave enough for June 4th, December 31st and others. There you are, repeating some of the manufactured 40-year-old lies about Boakye Djan leading soldiers to rescue me. Let me assure you that guy never led any soldier to rescue any goat anywhere.”

Rawlings who has over the years, fallen out with a number of his compatriots fell short of describing Boakye Gyan as a coward in his strongly worded statement issued by the Communication Directorate of his office.

“You cannot be that ignorant of another claim that he was directing the ’79 revolt from inside one of the Recce armoured vehicles?

“Even as the Recce armoured squadron was under siege and some of the Senior NCO commanders had retreated from engaging in the battle and waiting to join the infantry units, Boakye Djan had long escaped from his unit around 3 o’clock that morning of June 4th, when, according to him, he heard one of the soldiers cry out, 'kill all the officers,'" Rawlings explained.

Explaining further about the events of the June 4th Uprising, Rawlings alleged that the man credited for saving him actually fled to the bush behind the “5BN quarters and found himself crouching next to another Captain on the bush track and with the approach of dawn, the Captain said he headed east towards Tema where his parents lived while Boakye Djan headed westwards to Achimota school. I would dare him to invite the unnamed officer to deny or confirm what I’m saying.’

“It wasn’t until late that afternoon that he was fished-out of his girlfriend’s quarters by a detachment. As should have been expected, he refused to open up until Flt. Lt. Lee threatened to climb up and break down his woman’s door.”