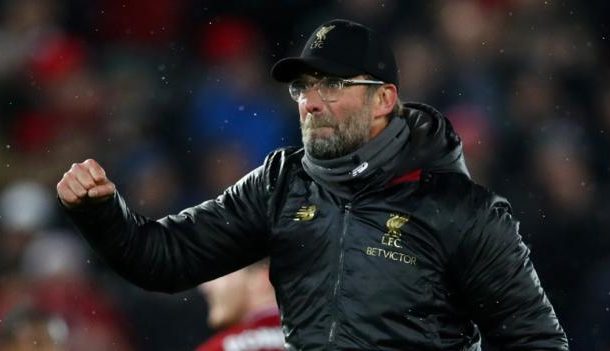 Liverpool manager Jurgen Klopp said he "didn't speak a word" about title rivals Manchester City before his team's win over Manchester United.
Sunday's 3-1 victory took Klopp's side back to the top of the Premier League after they were briefly overtaken when City beat Everton on Saturday.
"I'm happy with the situation," Klopp told BBC Radio 5 live.

"But I promise we didn't speak a word about the table or the City game on Saturday before our match."

Relive Liverpool's victory over United here
Shaqiri steals the show - how the players rated
'United can still make the top four' - Mourinho
End of Mourinho? Will Pogba leave? The big questions after United lose at Liverpool

Xherdan Shaqiri struck two late deflected goals to seal victory at Anfield, a result which means the Reds top the Premier League table after 17 games - a feat they have only achieved once before - in 1996-97.
Unbeaten in the league this season, Liverpool have 45 points - their best tally at this stage of a top-flight season - and Klopp wants to focus on his side's form rather than City's.
"We all know their results, that's how it is," Klopp said. "But it doesn't matter, we cannot change the results of other teams and we cannot be champions in December.
"All we can do is collect points and win football games. So far, it's going OK.
"If there is a moment at the end of the season when we're still around them and we have to think about them and start hoping they drop points, maybe we will, but not today."
The German did, however, say his attention would turn to City as the clubs' next Premier League meeting draws closer.
"At the moment we respect them a lot, they respect us, and we have to win football games against all the others," Klopp said.
"Then we meet on 3 January again and then we will be thinking about City a lot."Source: bbc.com