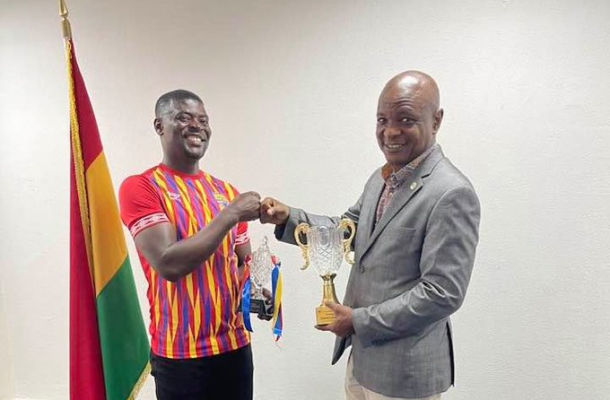 Ghana Premier League side Accra Hearts of Oak has decided to let go of the services of head coach Samuel Boadu barely two years into his stint as a coach.

The former Medeama coach has overseen a trophy-laden reign at the club as in his first season in the 2020/2021 season he won the League and MTN FA Cup double.

According to reports, the Board Chairman of the club, Togbe Afede met Coach Samuel Boadu on Tuesday morning in a hurriedly arranged meeting and informed him the club wants a mutual termination of his contract.

The two parties agreed on the modalities of the termination with Boadu leaving with his entire backroom staff with Hamza Obeng and the goalkeeper's trainer Eric Amponsah.

During his 15-month stay with the phobians he won five trophies with Hearts of Oak.

He endured a difficult start to the season as Hearts of Oak are without a win in three matches losing one and drawing two.