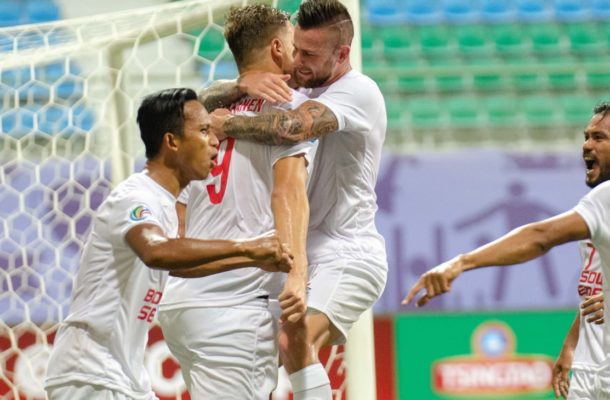 Singapore: PSM Makassar coach Darije Kalezić was satisfied with his side’s performance in their 1-1 draw with Home United in their opening AFC Cup match at the Jalan Besar Stadium on Wednesday.


Competing in the AFC Cup for the first time in their 103-year history, the Indonesian side took a first half lead before being pegged back by a stunning second half strike from 20-year-old Hami Syahin.

Despite pushing hard to find a winner late in the game and forcing Rudy Khairullah into a number of fine saves, the six-time Indonesian league champions had to settle for a point away from home, a result Kalezić was happy to accept after the game.

“I think for the first game in the history in (the AFC Cup), on these field conditions, we have to be satisfied with the draw,” the 49-year-old said after the game.

“We played very hectic, same as our opponent. I think in the future we can put the ball on the ground a little more.

"We created enough opportunities to win but we failed to capitalise on the chances we made."

"Their equaliser was a goal of the highest order, but we should have won the match 2-1 if we had been a bit more clinical in front of goal.

"However, we have to be satisfied with one point away from home.

"This is a good start for PSM and I am optimistic that our performance will be even better in the next match."

His counterpart, Home United coach Saswadimata Dasuki, was pleased with the fight his side showed to come from a goal down and earn a valuable point as they seek to repeat last year’s success when they were crowned ASEAN Zonal champions.

“It was a very, very pleasing performance, especially in the second half when we come back from one goal down. The chances that we had in the first half, if we took them it might be a different ball game.”

Having won the season-opening Charity Shield on Saturday, his side must back up for their opening Singapore Premier League game on Sunday followed by another game five days later before their trip to the Philippines to play Kaya FC on Matchday Two, a schedule that will see them play four games in 13 days.

“Of course we’ve got another game this Sunday, the boys are tired but I feel that we have to keep going and hopefully in the next game against Kaya we can get the result over there.”