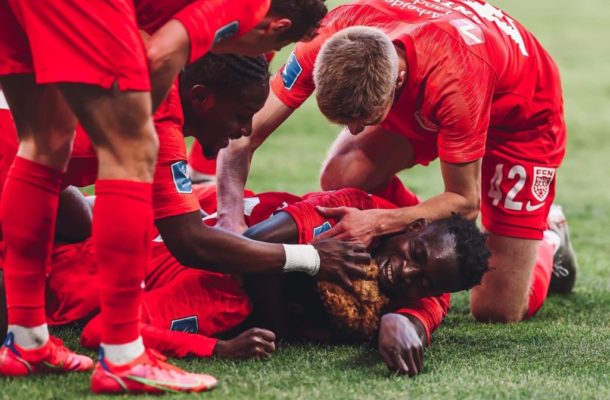 Ghana and FC Nordsjaelland winger Kamaldeen Sulemana scored another goal for his side on Monday night when they secured a comeback victory against FC Midtjylland in the Danish Super Liga on Monday.

The winger has been superb form this season for his side and converted from the penalty spot to equalize for his side at the Right to Dream Park.

Nordsjaelland took the lead with an own goal from Frank Onyeka , before Midtjylland leveled on the stroke of half time through Sory Kaba.

Kamaldeen Sulemana grabbed the equalizer for his side from the penalty spot in the 66th minute to restore parity.

Pione Sisto gave the Danish giants the lead in the 54th minute of the game with a fine finish before a late strike from Simon Adingra in the 90th minute gave them all three points.

The 19 year old Ghanaian wonder-kid has now scored ten goal this season for his Nordsjaelland side in the Danish Super Liga.

He has attracted interest from a wide array of clubs with Ajax and Lyon said to be interested in the exciting winger.