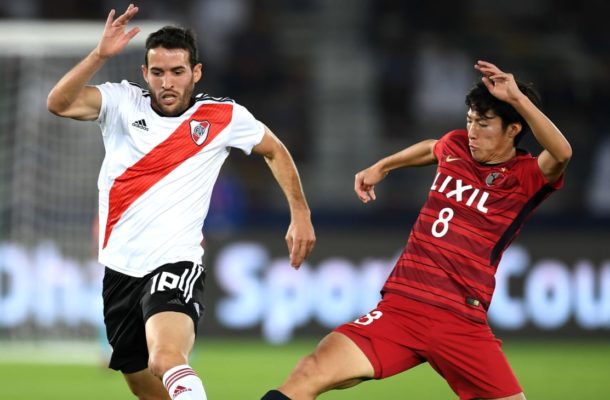 
The 4-0 scoreline was perhaps a little flattering to the Argentines but there was no question River were more ruthless in front of goal than their opponents, notably in the latter stages of the game.

While Marcelo Gallardo’s side started strongly it was Kashima who were closest to opening the scoring in the early stages when defender Jung Seng-hyun seemingly poked the ball home from a corner. However, a VAR referral saw his effort ruled out for offside.

It was instead River who made the breakthrough in the 24th-minute. Goalkeeper Kwoun Sun-Tae came off injured and moments later veteran replacement Hitoshi Sogahata’s first act was to pick the ball out of his net. Bruno Zucolini rose to meet Nicolas De La Cruz’s right-wing corner, the ex-Manchester City midfielder powering home his header in off the post.

Sogahata came to Kashima’s rescue soon after, producing a great point-blank save with his right leg to deny Rafael Santos Borre. And when Koki Anzai hit the crossbar on the stroke of half-time it seemed there may be a way back in for Kashima, who came from behind to beat Guadalajara in their first match at the FIFA Club World Cup UAE 2018.

Go Oiwa’s side continued to go in search of an equaliser in the second half, with River keeper German Lux producing a smart stop to palm away Shoma Doi’s shot. But the more Kashima poured forward, the more they were open on the break.

River’s counter-attacking style was key to their Copa Libertadores triumph this year and though it was absent in their shock defeat to Al Ain, the Argentines were back to their devastating best against Kashima.

A 73rd-minute strike from Gonzalo ‘Pity’ Martinez crushed Kashima’s fading hopes, the recently crowned Argentinian Footballer of the Year crashing a rasping left-foot strike into the roof of the net.

Striker Rafael Santos Borre helped himself to his third goal of the tournament with a late penalty after being brought down by Tomoya Inukai, before it was fittingly Martinez, playing his final game for River, who put the icing on the cake in stoppage time with a delightful chip.

It was a disappointing conclusion for Kashima, who will now regroup over the winter break and ready themselves for the defence of their AFC Champions League crown in 2019.