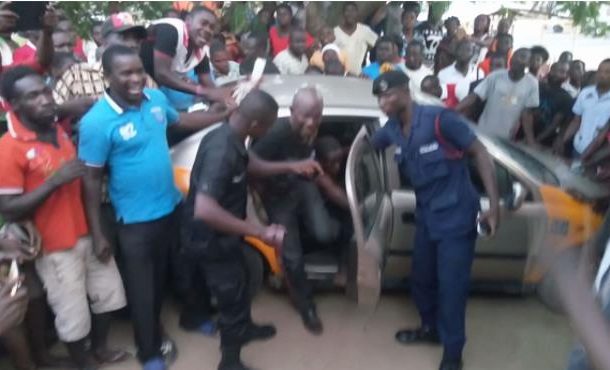 The Awutu Breku Police Command has arrested two persons who allegedly snatched a taxi at Kasoa in the Central region.

The police are looking for the third suspect known only as Kwame, who is currently at large. He said the police on that day received a distress call that three young men had snatched a Mazda taxi cab with registration number G 2399-15 from the owner, William Mensah at Blue Rose, Kasoa.

He said the suspects moved towards Awutu Botraase through Awutu Breku after snatching the car.

According to him, “The Police pursued them and arrested Nana Kwesi Adom, aged 38 and Kwame Naizer, aged 37 at Botraase after they got involved in an accident.”

He said that on that “fateful day Nana Kwesi Adom hired the services of a taxi driver at Cocoa Clinic in Accra to transport him to his plot at Blue Rose for a fee of GH¢80.00. When they got to Buduburam, the other two accomplices, Kwame Nazah and Kwame joined them.”