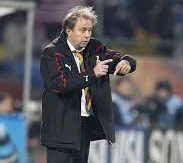 By Ken Bediako
So the unbelievers who were expecting an Oracle to be fulfilled with Milovan Rajevac's disastrous return had to watch a miracle performed. Instead, as it turned out, the Black Stars rose to the occasion in their crucial World Cup qualifying series at Cape Coast. The 3-1 scoreline is quite tidy if you consider the fact they conceded a lousy penalty in the early minutes of the second half when we were all expecting them to improve on their thin lead.
Perhaps, it was the right push they needed to bring out the best in them. Never mind the two splendid goals by Partey and Dede Ayew were a bit late in coming, it is agreed by all that better late than never.
No matter how you view the situation, it’s really a good start for Milovan and he should be encouraged to keep the momentum. The way he has been able to infuse some new sense of spirited play into the Black Stars group is noteworthy. My good friend Ben Ephson always maintains that if you give the same cooking ingredients to say five cooks to prepare dishes the taste of the dishes will vary from cook to cook.
Simply put, it should not be surprising that Milovan has been able to assemble almost the same squad he inherited to deliver the goods.
Anyway the battle has just begun and Tuesday’s back to back encounter in Zimbabwe is threatening to be even a more crucial battle since the Zimbabweans are almost impregnable at home.
There is no doubt that Milovan’s second coming has erupted controversy, especially by the media. For varied reasons support for the Black Stars cannot be said to be unanimous. Indeed, even some of my colleagues openly pray Ghana does not qualify for the world cup. It’s most unfortunate.
In fact, the benefits of the success of the Black Stars in the national psyche cannot be quantified. Let me therefore take this opportunity to appeal to my young colleagues to be generous in praise and slow to criticise so there will be national cohesion to bring back the fabulous days of Ohene Djan when the Black Stars were the monarchs of all they surveyed and the real pride of the nation.
Ah yes, the name Ohene Djan reminds me of the ingratitude the nation is showing by refusing to give Ghana’s topmost sports administrator the honour he deserves by erasing his name from the Accra Sports Stadium named after him by a Committee set up by the late Kwadwo Baah-Wiredu then in charge of sports. I plead that Ohene Djan be given the credit he deserves. This will be my topic next week Cheers and keep loving sports.