Kerr at the double as Matildas beat Korea Republic 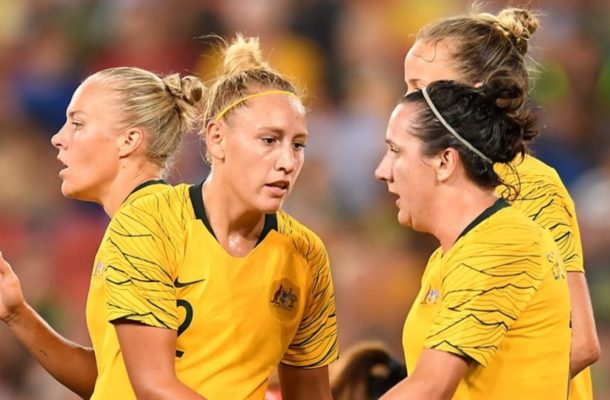 Brisbane: Australia made it two wins from two under Ante Mlicic, and moved to within 90 minutes of an inaugural Cup of Nations title with a 4-1 win over Korea Republic on Sunday.


Newly-appointed captain Sam Kerr scored twice, while Lisa De Vanna and Emily Gielnik also found the back of the net as the Matildas impressed in front of 10,520 fans in Brisbane.

The result means Australia require only a draw against Argentina on Wednesday to lift the Cup of Nations, after New Zealand beat the South Americans 2-0 in the day's earlier fixture.

Both Australia and Korea Republic came into the tie after opening day wins, but it was the Matildas who seized the momentum in the early stages; taking the lead through a Kerr penalty in the sixth minute after the forward was fouled in the box.

But Australia's lead only lasted six minutes, with Korean star Ji So-yun caressing a superb 20-yard free-kick beyond Mackenzie Arnold and into the Australian net at the 12-minute mark to level the tie.

Chances fell at both ends of the pitch, with Korean shot-stopper Kim Jung-mi bravely preventing Kerr from scoring a second, before Lim Seon-joo headed just wide for the visitors, but two late goals ensured Australia finished the first half with a commanding 3-1 lead.

Korea Republic's woes were then compounded when Kerr scored her second for the half in added time, pouncing on Jang Sel-gi's errant back pass to beat Kim from 15 yards, with the goalkeeper unable to keep the Perth striker's shot out despite getting a solid hand to the ball.

An early mark for Kerr denied her the chance of a hat-trick, and De Vanna and substitute Princess Ibini-isei both had chances to extend Australia's lead after finding themselves on the end of excellent passing moves, but it was Gielnik who put the tie to bed with nine minutes remaining.

Just moments after entering the fray as a substitute, the athletic Melbourne Victory utility cut in from the left wing and ignored the opportunity to cross, instead opting to spectacularly thump the ball beyond Kim and directly into the back of the net to make it 4-1 on a memorable night for the Australians in their build-up to the 2019 FIFA Women's World Cup France.