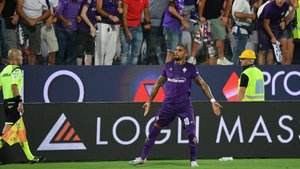 Ghanaian International Kevin Prince Boateng is under fire from Fiorentina fans following continuous disappointing performance, with his physical condition has been the talking point.

Kevin-Prince Boateng's stage at Fiorentina is not going as well as the two sides would like.

Despite the opportunities that have been given, the Ghanaian is performing very far from the expectations he created with his arrival in Florence.

He has only a goal to his credit in seven outings since he arrived in July 2019.

And there are already several voices who blame the bad moment on his physical condition .

One of them is that of the legendary goalkeeper Giovanni Galli , who has been very blunt with the player.

As one of the great icons of the 'viola' club, Galli's words in 'Lady Radio' are very representative of the feeling of the fans and the entity.

"He has obvious difficulties and his physical condition is unpresentable," Galli said.

" It is clear that his signing has not worked, and is that everything he showed in Milan or Sassuolo has not been seen on his return to Italy, as explained by the exguardameta himself, who understands that.

"His past and prestige is important, but it's not the one from years ago . "

And because of this bad state, key considering the style of Boateng's game, it explains how little he is contributing to a team whose season is being very disappointing.

"I didn't think I could play as a starter. He doesn't press, he doesn't from anyone and doesn't steal the ball," Galli said.

In the last match against SPAL the striker was the starter , but his low impact on the game made him replaced at rest. So far this season he has played 15 games and has only seen a door once . Fiorentina, apparently in the recent duel, is still determined to try to find his best version, but Prince's best years are only a memory.