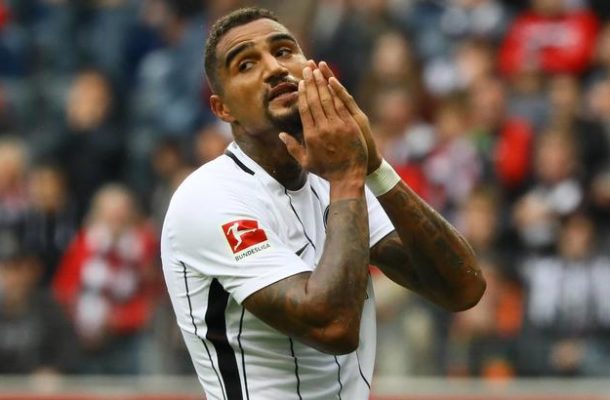 Hertha in Berlin thinks big thanks to the bubbling millions from investor Lars Windhorst.

Kevin-Prince Boateng is one of those who enjoy making Berliners successful. He makes big plans with the capital club - and with his half brother.

There are many ways to ignore a text message. Regardless of whether a business lunch with investor Lars Windhorst or a Facebook live stream gets in the way, you should usually answer anyway - just for the sake of courtesy.

And so the 1990 world champion with his ignorance prevented one of the most spectacular transfers in Berlin's club history.

As Boateng reveals in the "Spiegel" interview in mid-April, he offered Hertha big plans.

A new club anthem by Berlin rappers, Mario Götze and Julian Draxler: The full program to polish up the dusty image of the old lady.

He wanted to let contacts play and "build" something in the capital. But Klinsmann left all his ideas unanswered. Well, two Hertha coaches later, so again: The Berlin boy dreams of returning to the Spree - together with half-brother Jérôme.

Of all the absurd stories that haunt the media about the blue-whites, Kevin-Prince Boateng's seems to be the most exciting.

After the discounter Tedi left as the main sponsor, global corporations such as Tesla and Amazon are traded as successors.

It's about marketing and the alleged big city glamor of the capital. Nothing is "as Berlin" as the two brothers: they learn to kick on a soccer field in Wedding, are closely rooted in the club and know the dirty, unadorned image of the city.

Kevin-Prince and Jérôme Boateng are among the best that Berlin football has ever put forward.

They once formed a golden Hertha generation with Chinedu Ede, Patrick Ebert and Ashkan Dejagah.

The group made the leap into the professional squad collectively in 2006. But apart from Jérôme, who moved on after only eleven games, everyone fell short of expectations.

Kevin-Prince left Hertha after 53 games, then started an odyssey through Europe's football leagues and gradually hplays at a total of 13 clubs.

The farewell from Berlin was a "mistake". Why didn't the 33-year-old become a regular at any club? "I know very well that I failed because of my will," he explains at DAZN and Goal a year ago.

What is possible, if he wants, flashed in Frankfurt. Eintracht played into a frenzy in 2017/18. The eagles euphorized beyond the Main region - also thanks to Kevin-Prince Boateng.

With him and the DFB Cup title, the Kovac team immortalized in German football history. In the final it was the midfielder who hit the legendary ball on Ante Rebic and spectacularly thwarted the double for Bayern.

Boateng "won the game almost alone with his intelligent way of playing", as the Ur-Herthan Pal Dardai later called "B.Z." said. The "Bad Boy" image is so impressively refuted by the two-time World Cup participant.

Boateng is now 33 years old. Can he really help the ambitious Hertha? Dardai is convinced: "As top, as tens, eighth, sixes - Kevin has it all," said the former team-mate. With the departure of Routinier Per Skjelbred, there is no such thing in the capital.

No matter where it burned, the Norwegian was there. There is also a gap in the creative field of midfield. Combining the two creates a role that Boateng fits perfectly into. In the upheaval of the Big City Club, the former Ghana international could be part of the framework to properly incorporate the newcomers around Lucas Tousart and Santiago Ascacibar.

Jérôme Boateng would also be involved as a possible defense chief. In the meantime, the eight-time German champion at Bayern is again undisputed, but still not indispensable. Although central defense is currently the showpiece of Hertha, the Rio world champion is in top form in another league.

Under coach Bruno Labbadia, Dedryck Boyata and Jordan Torunarigha were placed in the season finale. Karim Rekik and Niklas Stark are in the second row. However, none of them can match the reputation of the triple winner: every young central defender in Berlin has to put up with the comparison of the press and fans: will he be the next Boateng?

At Hertha, big names have only been on the bank or on the supervisory board for a long time, no longer on the pitch. Both brothers are still good enough to help the team develop. Unlike image campaigns by advertising agencies, they are used to fill "Europe's most exciting football project" with life.