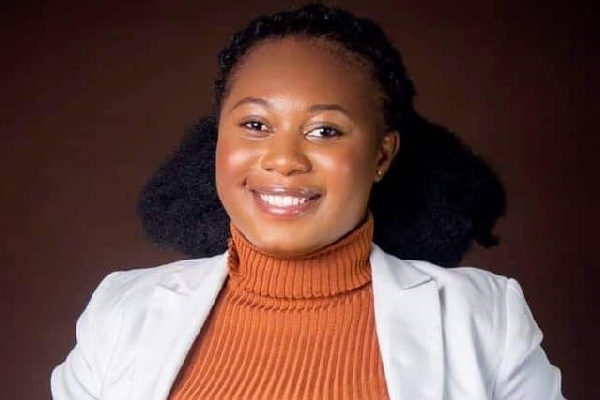 The Wa campus of the University for Development Studies (UDS) has elected Priscilla Khadi Vawurah as president of the Students Representative Council (SRC).

3news.com reported that she becomes the first female to lead students’ affairs in the history of the school since its establishment.

Her journey to the top did not come easy; it has been one of determination, persistence and tenacity, as her first failed attempt to becoming SRC President last year did dissuade her from trying again this year.

Having learnt from the previous year, she brought a wealth of experience to bear, better strategized and stayed top of her contenders, who were all males, and eventually garnered 49.58% of the total votes cast as was declared as SRC President-elect on Monday, June 28, 2021. That meant that her male contenders had to scramble over the remaining 50.2% which left them trailing behind.

Priscilla Khadi was born in Offinso in the Ashanti Region of Ghana and attended the Northern School of Business Senior High School (NOBISCO) in Tamale.

After graduating from SHS, Khadi never relented in her efforts to pursue a professional career as a Cosmetologist and a Beauty therapist. She’s a proud old student of Oyska Technical Institute of Cosmetology, Kumasi, Ghana.

In 2017, Khadi was admitted into the then University for Business and Integrated Development Studies, Wa Campus to offer a 2-year Diploma program (Diploma in integrated Community Development) in the university and eventually enrolled to pursue her first degree after the successful completion of the Diploma program in 2019.

Khadi is currently a level 300 student of SDD UBIDS pursuing integrated Development Studies with a specialization in Social and Development Administration.

She aspires to be a great Advocate, a philanthropist, and a change driver. She’s among the few advocates today whose advocacy does not discriminate, contradicts neither nor suppresses the opposite sex.

In terms of leadership, she has gained quite some experience. Priscilla is a lead advocate with Plan Ghana International. She has also been at the forefront of students’ leadership and wellbeing for many years and has led several Students’ Unions including what she’s presently occupying as the Chairperson of the Women’s Caucus of the Youth Parliament on campus.

She is Versatile, excellent in planning and organizing, and everyone can speak of her excellence in Communications.

What set Priscilla apart from her contenders?

To keep championing the aspirations of impacting and inspiring, she took the bolder step of running for the position of the SRC president as the first female in 2020, while being a level 200 degree student. As someone persistent, losing that election did not suppress her interest and that ignited the courage to run again this academic trimester as a level 300 student while competing with three capacitated men.

Khadi keeps emphasizing the fact that, her social advocacy and benevolence are geared towards having a positive impact on both students. Her benevolence activities include, but are not limited to the following:

1. A collaboration with Hermes Healthcare Center to organize a health screening in Bamahu, WA. This exercise helped over 300 students to get a free health screening which includes Free Consultation, Free hepatitis B & C test, Free sickling test, free checking of blood groups, e.t.c.

2. A collaboration with Zoomlion Ghana to clean up Bamahu & its environs. This was successful as they needed support was gotten from students and ZoomLion Ghana. This emphasizes her mobilization skills in healthy and needed projects.

3. A collaboration with the In-Out group to plant 5 million trees to save lives.

4. A collaboration with all the 4 halls executives to organize a cleanup exercise under the TIDY UP UBIDS PROJECT; an initiative of Khadi. This confirms what Khadi preaches for always; and inclusiveness administration. She’ll be a collaborative person who will work and march with everyone in fixing UBIDS.

5. A donation of COVID-19 items to kong, her Ttfpp community during the hard times of the global pandemic.

6. And the biggest ever donations to the Campus Clinic with support from her sympathizers. During the Covid 19 break, she visited the school clinic on a meeting with the doctor and as well to see how patients cope at the clinic. Her engagements informed her of some necessities the clinic lack which enforced the donation.

All the above were achieved before the election process confirming the fact that she’s not limited to being in power before she can impact. This shows that power will only capacitate her more.

She had a clear and brief message which is achievable in a short term. She insists that:

-Every fan in the lecture hall should function

-Every lecture hall should have adequate good furniture

-Every streetlight on campus should function

- Student entrepreneurs should be supported through her Capacity Building policy

-Sportsmen and women should be given scholarships.

These traits are some of the forces that drove students’ interest in buying into her ideologies and vision when she made her aspirations public to the students’ populace. Students ranked her policies to be the most feasible and realistic policies among all the other candidates. Thus, she got elected as the SRC president.

Khadi’s win speaks volumes; it’s an expression of how students of UBIDS are going to experience the leadership of a female, for the first time.