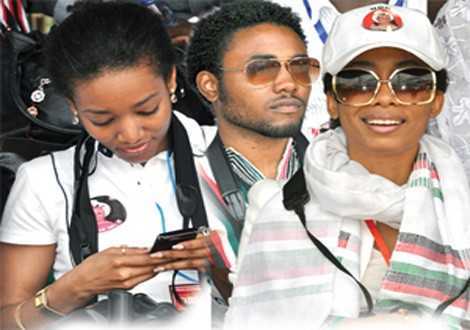 Nana Konadu, is the Presidential Candidate of the National Democratic Party (NDP), her son, has joined his father, who is the founder of the governing National Democratic Congress (NDC), as well as his eldest sister; Zenator Rawlings, who is vying for the Klottey Korle Parliamentary seat on the ticket of the NDC.

A picture sighted by The Herald, shows the only son of the Rawlingses; proudly wearing a green NDC t-shirt with portrait pictures of both Dr. Zenator Rawlings, and the President, John Dramani Mahama, boldly engraved in it.

The picture confirms claim from The Herald’s insiders in the Rawlings household that, the four children of Mr. and Mrs. Rawlings, are equally divided along parental lines.

While, Zenator and Kimathi, are umbilically tied to their father, the middle ones; Yaa Asantewaa and Amina, are tied to the aprons of their powerful mother.

But insiders tell The Herald that, while Yaa Asantewaa is a carbon copy of her mother in form, shape and character, Amina Rawlings, is mentioned to be at the mercy of the wind; easily swayed by whose voice is louder at a particular time – it is mostly Nana Konadu’s voice, which vibrates in her ears and that is what she often times obey.

Meanwhile, Kimathi’s picture which is making the rounds on many social media platforms, especially Facebook and WhatsApp, has two other NDC supporters, posing for the cameras with him wearing Zenator-Mahama t-shirt.

The 37-year old and mother of three – Zenator – became the NDC parliamentary candidate under controversial circumstances, which culminated in the incumbent MP, Nii Armah Ashitey, sending her and the party to court over the nationwide NDC Constituency primaries in November 2015.

Mr. Rawlings, founded the governing NDC and was president for 8 years, after his 11 years of uninterrupted military rule.

His wife, Konadu Agyeman Rawlings, in an attempt to equalize her husband’s feat, hurriedly formed the NDP in 2012, to contest that national elections after she was resoundingly defeated at Sunyani by the late president, John Evans Atta Mills at the NDC Presidential Primary.

Though, Mrs. Rawlings, was unsuccessful in that election, because her NDP, was unable to meet the requirement of the Electoral Commission (EC), then headed by Dr. Kwadwo Afari Gyan, she is making frantic effort to be counted on the ballot paper in this year’s elections.

Months ago, the NDP, held it national congress in Accra and was briefly attended by Mr. Rawlings and his two other children, Yaa Asantewa and Amina.

Kimathi, who this paper cannot independently say, was in the country then, was never seen at that congress held at the Ghana International Trade Fair Centre (GITFC).

Similarly, few weeks ago, when the NDC, also held it national campaign launch in the Central regional capital; Cape Coast, it was attended by Mr. Rawlings and daughter, Zenator, the young man was not spotted there either.

But in recent times, Kimathi, has been seen at the Klottey Korle Constituency, supporting his senior most sister to become a legislator and also for President Mahama, to win a second term in office.

Daprinz 10 months ago
Was Obama good president.? What did he do for Africa?
Abena 10 months ago
Don't make a mistake to go for Zenatir Rawlings as running mate. If you did did that you lose my vote.