King of the thunder bastards: A tribute to Tony Yeboah at Leeds United 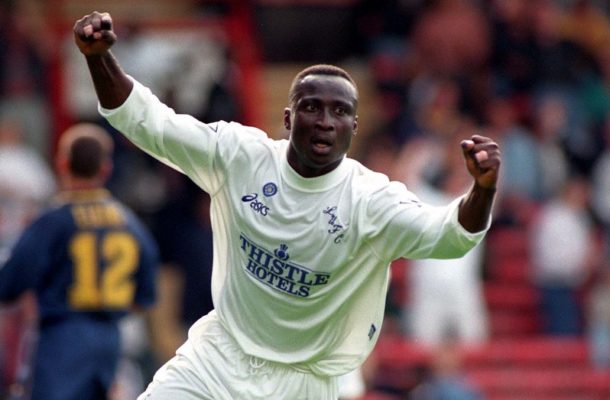 Take yourself back to the late summer of 1995. Take That were top of the charts, Kevin Costner’s Waterworld was headlining at your local cinema, and O.J. Simpson was experiencing a squeaky bum in front of a jury of his peers.

In the Premier League, exotic names were appearing on teamsheets across the land. Ruud Gullit at Chelsea. Dennis Bergkamp at Arsenal. Georgi Kinkladze at Maine Road. But in the early weeks of 1995-96 only one man was stealing the headlines: Anthony Yeboah.

Leeds United’s resident Ghanaian embarked on a run of goalscoring form that made him a Premier League cult hero and the undisputed the King of the Thunderbastards. As @Sid_Lambert remembers.

After arriving from Eintracht Frankfurt in January, Yeboah had taken little time in acclimatising to his new surroundings, and a springtime hat-trick against Ipswich showed that he was starting to simmer nicely.

By the time the new season started, Yeboah was hotter than Satan’s arsehole after an uncooperative Chicken Madras.

He scored twice a 2-1 win at Upton Park on the opening day. His first was an impressive header, his second a moment of quite exquisite savagery.

It started with that most traditional of Howard Wilkinson tactics: the hoof forward. Followed by the equally characteristic West Ham defensive cock-up, as Marc Rieper and Steve Potts suffered a collective brainfart to leave the Leeds striker space to shoot.

Still, even they couldn’t have expected what happened next. Yeboah’s left peg unleashed the most unprovoked act of violence in the East End since Ronnie and Reggie decided Jack McVitie was getting on their nerves.

The ball sizzled past Ludek Miklosko and back out again before the giant Czech could even react. This was the same Ludek Miklosko who just months earlier had performed miracles to keep out Manchester United, thereby gifting Blackburn the title. Even he was powerless. Sometimes there’s nothing you can do.

Later that week Leeds travelled to Monaco in the UEFA Cup and took a sizeable following to the south of France. It was a clash of Hovis versus haute couture. Grand Casino versus Gary Kelly. Wine versus Wensleydale. And there was only one winner.

Yeboah notched a hat-trick, the pick of which was this extraordinary second goal.

Under Wilkinson’s blueprint, a throw-in near the opposition penalty was normally a chance to get it in the mixer. However, Yeboah wasn’t one for tactical discipline.

A trademark turn left his marker for dead and he uncorked a shitscorcher of a strike into the top left corner. The Leeds corner of the ground was a sea of energetic young men in white shirts and stonewash denim (and they say Take That haven’t influenced football), while even the home crowd stood to applaud its genius.

The final score would be 3-0 to the visitors. It wouldn’t be the last Yorkshire battering in Monaco of the 90s. But we’ve all heard enough about Geoff Boycott. This would comfortably be the most feted.

There are some goals that seem destined to remain part of any self-respecting Premier League montage: David Beckham spotting Wimbledon’s Neil Sullivan off his line, Dennis Bergkamp sending Nikos Dabizas out for a paper, and Tony Yeboah nearly splitting the crossbar at Elland Road.

It came in the 51st minute of a closely contested Monday Night Football. Tony Dorigo clipped an aerial ball forward (again, the true essence of Wilkinson) and little Rodney Wallace won his first header of the 90s against a rather timid Reds’ defence.

From then on, it’s the stuff of dreams. The ball seemingly suspended in mid-air, Yeboah’s eyes wider than George Best at the Miss World after-party, and then a shitscreamer of a volley that defied the laws of space and time.

David James couldn’t believe what he’d seen. He was accustomed to picking the ball out of the net (the young Liverpool keeper was in a calamitous spell of form whereby you wondered if his gloves were smeared with Lurpak), though nothing quite like this.

It was Yeboah’s 16th goal in 18 starts for his new club. A finish filthier than a miner’s bootstrap and – according to all in attendance – a shoo-in for Goal of the Season. But there was more, much more, still to come.

It had been a rough day for Wimbledon’s second-choice keeper Paul Heald. He’d already suffered the indignity of Carlton Palmer scoring past him from 25 yards. Then he was beaten by a goal destined to become part of Premier League folklore. Generations to come would see replays of him flailing helplessly in mid-air while Tony Yeboah’s shot screamed past him.

In some ways, he was probably lucky. If he had made contact, then it would surely have ended with splintered bone fragments across Selhurst Park.

As for the strike itself, it gets better with every viewing. Incidentally, I say the same thing about Predator.

There were six Wimbledon players in Yeboah’s vicinity when he got the ball, yet none of them sensed the immediate danger. A rank defensive header was firstly chested, then cushioned on the thigh.

At this stage the sensors started to flicker to red, but it was too late. Tony was tuning up the band. A dummy left the oncoming defender for dead and then the right peg smeared it into the net, off the bar for good measure.

It also introduced a permanent new entry into football’s lexicon: Yeboah (verb) To twat the arsehole out of an inanimate object and achieve spectacular results.

In fact, the influence goes far beyond the playing field of association football. Geo-political warfare, for example: “Mr President, it is the recommendation of this committee that the best way to achieve operational success in Afghanistan is to Yeboah the Taliban.”

Or, for those slightly more genteel souls, the ballroom: “The keys to a good Charleston are posture, energy and going out there and absolutely fucking Yeboah-ing that dance floor, darling.”

Sadly, despite his cultural influence, within a year Yeboah was inching his way towards the exit door at Leeds. Injuries, and the arrival of George Graham, affected his performances. But for that four weeks in 1995-96 he was simply untouchable.