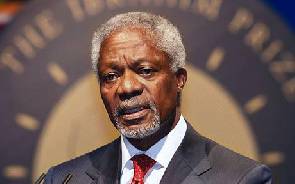 Kofi Annan is said to be leading one of two royal families involved in the six-year-old wrestle for a chieftaincy title in the Akwamu Traditional Area in the Eastern Region.

Myjoyonline.com sources say the adjudicators at the Eastern Regional House of Chiefs, where the matter is being heard, believe the presence of the respected Diplomat would fast-track the resolution of the dispute.

In a bid to stop the process, the rival Ansaa royal family referred the matter to a High Court in Koforidua, but that did not stop the Botwe family from installing Nana Owiredu as chief of the Akwamu Traditional Area.

An arrest warrant was subsequently issued in 2012 for Nana Afrakoma and Nana Owiredu for contempt.

The matter was eventually referred to the Eastern Regional House of Chiefs for resolution, but the defendants, the Botwe royal family, have accused the Ansaa family and the former UN Secretary General – who is head of the Ansaa family – of unduly dragging the matter.

Although Mr. Annan and the Ansaa family have purportedly given the Power of Attorney to one Owusu Bruku, the lawyer for the Defendants Kweku Painstil argues the absence of a substantive member of the Ansaa family at hearings was working against efforts to end the dispute.

Mr Paintsil also faulted the Power of Attorney document presented, suggesting that because Mr. Owusu Bruku was not a member of any of the two royal families, he lacks the ability to provide credible evidence.

During sitting, Okyenhene Osagyefo Amoatia Ofori Panyin also wondered why the Power of Attorney document was not signed by Mr. Kofi Annan, raising doubts about the authenticity of the document.

The panel of chiefs hearing the matter, therefore, asked the lawyer for the Plaintiff, Stephen Asante Bekoe, to produce Mr. Annan on the next sitting, scheduled for November 9, 2016, to bring clarity the matter.