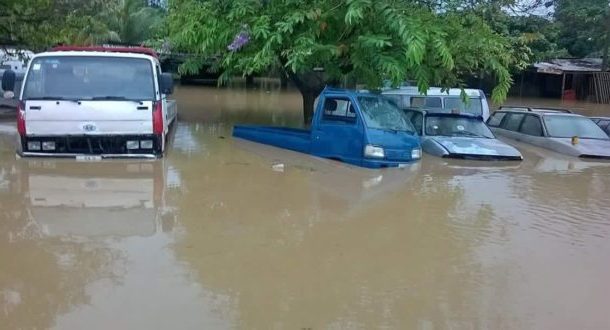 The National Disaster Management Organisation, NADMO, says the torrential rains that hit Koforidua and some surrounding communities in the Eastern Region over the weekend, affected over two thousand people.

According to NADMO, its assessment revealed that, the victims lost most of their household items in the flood that claimed two lives.

The Eastern Regional Coordinator, Ransford Owusu Boakye, said relief items would be distributed to the affected victims by close of today.

“We have about 150 houses being affected with a total number of about 2,650 victims out of which about 600 are very vulnerable and those are the ones we are going to attend to. We have not had any building collapsed for now; but items were destroyed. We have some items ready for distribution and by close of the day it should go to the victims.”

Two persons were confirmed dead after heavy rains ravaged parts of the area. The town was submerged in flood waters which washed away parked vehicles and other properties.

A freelance journalist, Ferdinand Akuffo Baah, told Citi News areas such as Nsukwa, Kenkey factory road, a bridge and a Church of Pentecost building on that stretch were badly affected.

Some residents were also injured as a result of the incident. NADMO begins impact assessment  On Monday, NADMO conducted a disaster impact assessment in the area after the incident occured. The Eastern Regional Coordinator of NADMO, Ransford Owusu Boakye said they are hopeful the assessment would be concluded before relief items are distributed to the affected families.