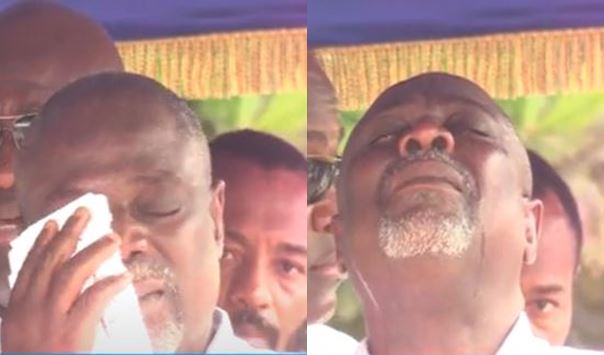 Founder of the Atta Mills Institute, Koku Anyidoho could barely hold back tears on Sunday morning when hymns were being sung at the thanksgiving service held to commemorate the 10th anniversary of the late president, John Evans Atta Mills.

Koku Anyidoho who was until the demise of the late head of state, was his aide, shed tears profusely while the choir was singing a hymn.

The visibly pained Koku Anyidoho had to eventually be consoled by another person at the event.

Mr. Anyidoho, among other things, has been expressing displeasure about actions and or inactions of some members of the National Democratic Party to whom his former boss belonged.

According to him, the party neglected the former president and paid no attention to honouring his memory till the ruling government took up the task.

Speaking at the event on Sunday, July 24, 2022, Mr. Anyidoho said the ruling New Patriotic Party (NPP) has worked with the Atta-Mills Institute to construct and renovate the Asomdwee park which had been deserted by his own party – the NDC.

“Straight to the point, and for reasons that cannot find any acceptable expression, the government at that time failed to construct Asomdwee Park to befit the status of the final resting place of our late President.

“To the glory of God, in 2020, His Excellency President Akufo-Addo Dankwa gave the go-ahead for full construction of the Asomdwee Park to commence,” he said.

President Nana Addo Dankwa Akufo-Addo and his Vice, Dr. Mahamudu Bawumia joined several other Ghanaians at the 10th Thanksgiving and memorial service held in honour of the late John Evans Atta Mills.
The service, which took place at the Asomdwee Park in Accra on Sunday, July 24, 2022, saw many people including government officials thronging the grounds to commemorate the day celebration.

A monument of the late President was unveiled and the renovated park was commissioned by the president.