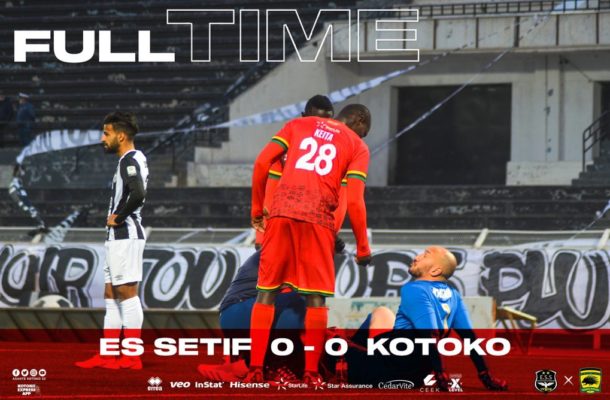 It was dubbed mission impossible even before Kotoko travelled to Algeria for the second leg tie against ES Setif as the porcupine warriors were dumped out of the CAF Confederations Cup.

The game was lost in Accra when Kotoko lost by 2-1 despite taking the lead through Kwame Opoku.

Kotoko was a much improved side despite lining up an attacking set up against the Algerian side.

The second leg ended 0-0 but Kotoko were eliminated on 2-1 aggregate after losing at home.

Razak Abalora was the main difference between Kotoko and conceding a raft of goals as he pulled off spectacular saves to deny ES Setif.

He pulled off two one-on-one situations and a brave fingertip effort to keep out a goal-bound shot to keep the results barren.

Kotoko made a rare foray forward as captain Emmanuel Gyamfi sent in a cross which deflected without reaching striker Kwame Opoku.

Emmanuel Gyamfi gave away a penalty in the 61st minute but the free kick did not hurt Kotoko before Kwame Opoku headed wide from a Gyamfi cross.

Godfred Asiamah sting the palms of the Setif keeper with a ferocious strike from range  while Setif had a last minute chance in added time to steal a win but Razak Abalora rescued Kotoko.

The two-time African champions started their Africa campaign in the CAF Champions League where they scaled over FC Nouadhibou of Mauritania in the first round qualifier but were eliminated by Sudanese giants Al Hilal Omdurman.