Kotoko return to winning ways as they tame Bechem United 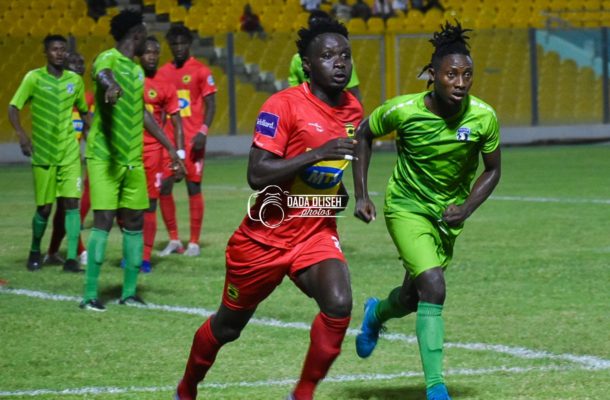 Kumasi Asante Kotoko made light work of 10 man Bechem United although they were given a scare early on when Hafiz Konkoni opened the scores for the away team on the 20th minute of the game.

There was still no place in the starting line up for club captain Felix Annan as he watched on the cold night in the rain socked capital from the bench while Augustine Sefah in place of the suspended Emmanuel Nettey made his first league start of the season.

Justice Blay who was out for a while with illness also made a return to the Kotoko line up.

But the porcupine warriors rallied and pulled parity through Martic Antwi in the 34th minute after goalkeeper Prince Asempa had parried an initial cross into his path.

Before the goal there was drama as the center referee pointed to the spot awarding a penalty to the home side for a perceived handball only to rescind the decision after consultations with his assistant referee.

The porcupine warriors added a second on the stroke of half time through Augustine Okrah to take the lead for the first time in the game.

Bechem goalie Prince Asempah palmed out Imoro Ibrahim's in swinger  similar to the first goal and Augustine Okrah was at the right place to tap in the save for the lead.

The porcupine warriors added a third through well taken free kick from Imoro Ibrahim in the 55th minute to make the results safe.

Bechem will later in the 65th minute be reduced to 10 men after Moro Salifu got a second yellow card and his marching orders.

Tried as Kotoko did they were not able to add to the goals as the wasteful William Opoku Mensah blew away good chances .

It's the second time Kotoko have scored three times this season in the league and all three goals came at the Accra Sports Stadium in evening fixtures.

The first time it was against Legon Cities and Kotoko had to come back just as they did this evening to win 3-1.